Final speaker of the first session was Webjet CEO Richard Noon. Had a great slide that I was able to quickly copy down to share with you. He showed his estimation of the annual Gross Bookings of major full service OTAs in Australia. Here is that graph as I copied it.

If you are interested in the Australian turnover of Webjet, Expedia, Bestflights, Zuji, Lastminute.com.au, travel.com.au and online for flight centre check it out. 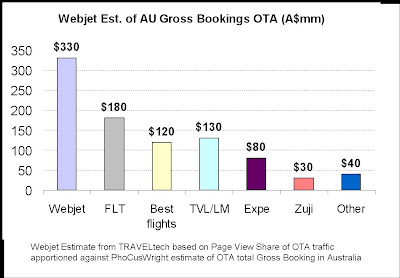 Later during the panel session these numbers were put to each of the bosses of Zuji and Expedia.

Expedia AU MD Arthur Hoffman dismissed the $80mm estimate for Expedia saying that this was a very pessimistic view. That actual number was "far north of that".

Zuji CEO Scott Blume - "took the fifth" when asked about the $30mm estimate. Saying that they do not break out their bookings.
Posted by Tim Hughes at 10:16

What was the timeframe?

Do those numbers include transactions started online and completed offline? Eg call centres, stores? I think that would give us a very different picture.

am assuming online only