We are 15 years into the online travel revolution and travel search is still in its infancy. In a post over at Tnooz I discuss four Australian based start-ups trying to recreate the travel search experience. Check it out
"The future of travel search lies on a Silicon Beach (not in a Valley)".
Profiled in the piece are the following start-ups. Click on the links for detailed Q&A profiles
Posted by Tim Hughes at 07:26 4 comments:

Scoot - new airline, still a lot of SEO work to do

Scoot is the new (mid to) low cost carrier coming out of Singapore. They launched sales yesterday and have just commenced the first push in Australia with a sale for departures in June and October. Unfortunately they have not prepped properly for their launch. Have a look at the below Google search results for keyword Scoot. Lots of code in their ranking and Jetstar news article in number two. Gentle (if not firm) reminder how important it is to get SEO right at any time but particularly before a launch. 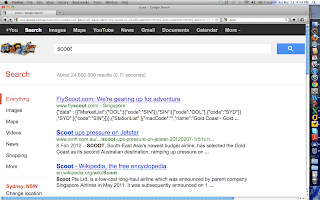 PS - they also need to get their twitter planned sorted out. @scootariline is not them and neither by any stretch is @flyscoot
Posted by Tim Hughes at 16:59 1 comment:

The next below four posts are profiles of 4 Australian based start-ups working to revolutionise the way travel search is undertaken. These posts are a prelude to a story I have written on Tnooz that will go live next week.
Posted by Tim Hughes at 10:12 No comments:

Email ThisBlogThis!Share to TwitterShare to FacebookShare to Pinterest
Labels: search, start up 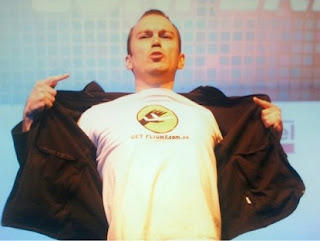 Email ThisBlogThis!Share to TwitterShare to FacebookShare to Pinterest
Labels: getflight, search, start up, start up interview 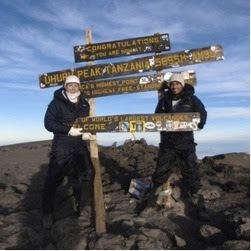 Below is a Q&A exchange with Flightfox.com founder Todd Sullivan (pictured here right on Mt Kilimanjaro with co-founder Lauren McLeod ). This is an instalment in my profile series on Australian travel search start-ups.

Sullivan: Flightfox is human-powered flight search; we use humans to beat machines. For a finder's fee, flight experts all over the world compete against each other to find you the best flights. Unlike most flight search engines (and travel agents), our experts search all the major airlines, budget airlines, special offers, newsletters, forums, and frequent flyer programmes. They use their many years of flight "hacking" experience to route you through the best cities, get you on the best flights, and save you as much money as possible.

Sullivan: We take a cut of the finder's fee, but with future investment we'll also generate commissions on flight bookings.

BOOT: Some examples of savings and interesting routings that people have comp up

Sullivan: Our most unusual trip was for a customer travelling with 3 cats. Of course, Expedia and Kayak don't cater to cats, and most travel agents will direct you to the airlines, but on Flightfox, our experts had experience travelling with pets and knew all the tips and tricks. For example, there are strict regulations regarding weather; in winter, many airlines restrict travel for pets. In terms of savings, we've saved people over $5,000 on complicated and premium class trips. Even on short domestic trips, our customers offload the searching to us and have peace of mind that our experts have found you the best price. On our average trip, which visits a few cities internationally, we save customers 27%.

Sullivan: Firstly, Startmate is the best decision we ever made. The pace at which we iterate and the access to successful mentors, seems to make start-up success so much more likely. Our other big lessons are all to do with marketplaces. But we're only a few weeks in, so I imagine we've barely scratched the surface.

Sullivan: we'd learned many lessons from a previous travel start-up, so there's nothing significant this time. For example, this time we spent no effort on logos, business cards, company registration, SEO, social media, etc, until we'd proven the concept and had confidence in its sustainability.

BOOT: What's next for the business.

Sullivan: What are you working on that is exciting - we're currently raising a seed round of investment to catapult our growth. We don't necessarily need investment, but we have big plans and want to make the most of the opportunity. Specifically, we have a plan to multiply revenue per customer, but for that we need investment. We have pitch days in Melbourne (27th March), Sydney (30th March), then San Francisco (3rd April) and New York (17th April). Investors are more than welcome to contact us for more info.

Email ThisBlogThis!Share to TwitterShare to FacebookShare to Pinterest
Labels: flightfox, search, start up, start up interview 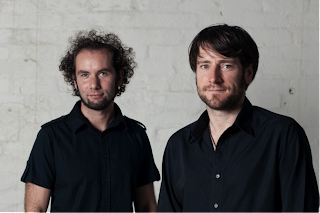 Here is a Q&A exchange with Adioso founder Tom Howard (pictured right with co-founder Fenn Bailey). This is an instalment in my profile series on Australian travel search start-ups.

Both of Melbourne, Australia

BOOT:How much money have you raised

Howard: Adioso is a travel search & discovery site that allows you to:

- search without constraints on dates & destinations ("Sydney to South East Asia late May", or "Brisbane to anywhere under $400")

Howard: Initially, commissions on transactions facilitated via the site.

Later, services to airlines and suppliers.

Howard: We don't consider our traffic particularly boast-worthy at this stage, but our we're approaching 100K visits/month, and we refer about $2million/month in leads to airlines. We're expecting much more rapid growth in coming months once we start rolling out the new features we have in the pipeline.

Our favourite stats are:

- Our user-satisfaction survey told us that 95% of visitors would be at least somewhat disappointed if we didn't exist; 50% of those said they'd be very disappointed.

Howard Travel's an awfully tough business for start-ups as you're up against decades-old technology and business practices. But if you can persist long enough to find a way through, the opportunities are vast and exciting.

Howard: Though a lot has gone wrong, I wouldn't wish it to be any different. We'd be better off if we hadn't taken so long to get our back-end technology working properly, and sometimes I lament the 12-18 months we've been delayed due to going about that the wrong way.

But because of that challenge we've been forced to learn so much more about the fundamentals of the travel industry and of building a great company, and have had to do it on a shoestring budget, so overall we're much better off,

BOOT: What's next for the business. What are you working on that is exciting Howard: Just last week we turned on the new version of our site UI. It doesn't actually have any major functionality over the previous version, but it gives us a platform to start doing a lot more cool stuff.

We're in the process of finishing our new search platform, that will enable us to scale to handle global airline inventory, including full-service carriers via GDSs (to-date we've been limited to low-cost airlines).

We've been trialling a hotel search feature, using HotelsCombined and Airbnb as suppliers, and we'll soon be adding this into the new version of the app.

We've also been trialling our "following" feature, that allows people to subscribe to alerts on destinations, flights, hotels and activities that are of interest, and get highly focused notifications when relevant products and deals become available.

Finally, we've conceived a new approach to browsing, sorting and filtering search results, that is testing very well with users.

We're gearing up to start rolling out these features steadily over the next few months. We're pretty excited to get it all out there.

BOOT: Where did your name come from

Howard: It was on a brainstorming list that Fenn came up with. "Adios!" seemed to nicely represent the idea of finding a cheap flight to an exotic destination and spontaneously taking off out of town.

We wanted something that was short, had the .com available, and wasn't overly literal like so many travel product names. Most of the discarded options were things like "Save-o-flight". I'm so glad we didn't go with something like that, and I'm surprised even today how many travel start-ups have these kinds of name

Email ThisBlogThis!Share to TwitterShare to FacebookShare to Pinterest
Labels: adioso, search, start up, start up interview 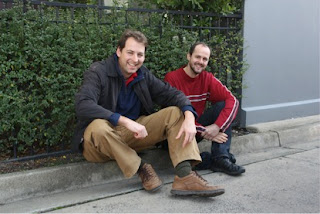 Below is a Q&A exchange with Rome2Rio founder Michael Cameron (pictured left with co-founder Bernie Tschirren). This is an instalment in my profile series on Australian travel search start-ups.

Cameron: None to date

Cameron: Nothing, so far we are bootstrapped.

Cameron: Rome2rio is a platform for organizing and searching the world's travel information. We have built a unique repository of train, bus, ferry and air routes across the globe. Users of the site can discover how to get to any city, town, or landmark - rome2rio will show several alternatives routes by air, rail, bus, boat and car.

Cameron: In January we recorded our 1 millionth query, and broke 120,000 unique users for the month. We marked this milestone with a blog post.

Something you learnt along the way

We've been surprised by the popularity of rome2rio in India; rome2rio has received more Indian visitors than visitors from any other one country. We believe this is due to a number of factors, including a burgeoning middle class and popularity of rail travel in the subcontinent. Also, rome2rio so far has received most of its visitors from English speaking countries, so we have started work on translating the site.

Cameron: So far, on the whole, we're happy with the approach we've taken to launching rome2rio. We launched the site early, with a minimum viable product, and used lean start-up principles to iterate and refine the product. As the product has developed and gained traction with users, we've now started to focus on the business model.

Cameron: We're continuing to add more transport to the site. We recently added trains in Japan and Sri Lanka. Coverage in Australia has been expanded too. We almost have complete rail coverage, so we'll be focusing on adding more bus and ferry routes this year. We also plan to add support for building complex, multi-hop itineraries; a feature that has been requested by several users.

Cameron: Who can go past the amazing digital resource of Wikipedia?

Email ThisBlogThis!Share to TwitterShare to FacebookShare to Pinterest
Labels: rome2rio, search, start up

Where to find 130+ travel APIs including Expedia, Kayak and Hotelscombined 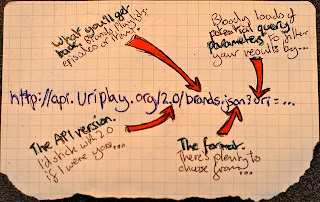 A typical email to me from a start up founder will go something like this
"Dear BOOT
Where can I access lots of information on APIs from travel companies. Building out all the data is really expensive. Are there any short cuts? Any indexes to travel APIs?"
Until now I have had replied with muted answers and near consultant babble speech about places to look and people to speak too.
But now I may have a better answer. This morning I came across a directory of 134 Travel APIs care of Programmable Web
thanks to thesmith on flickr for the photo
Posted by Tim Hughes at 08:58 No comments: 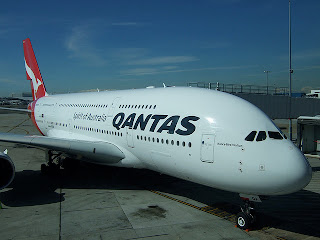