Just finished listening to a conference call hosted by analysts from Citigroup on the European leisure Travel Market. On the call Leslie Zarka and Heidy Rehman of Citi talked about their view on prospects for a downturn in the European leisure market especially given the reductions in RevPAR and occupancy rates that are now being experienced in the US.

The quick summary - they expect hospitality and package prices to stay strong and grow slightly in 2008 and first half 2009 but then weakness will start to appear. The only market they identified as having RevPAR issues at the moment was Italy.

Forbes 25 Most Influential Women in Travel including Kate Hanni

Forbes have published a list of the top 25 Most Influential Women in Travel. As you would expect Travelocity CEO Michelle Peluso (they carry and 1:1 interview with her here) and TripAdvisor CMO Christine Petersen make the list. What is fantastic is that Forbes have cited Coalition for Airline Passengers' Bill of Rights founder Kate Hanni. In case you don't remember, Hanni used her rage from being stranded/trapped on a plan in Texas for more than 9 hours to fuel a drive for change and consumer protection in the US air market. I did a post on her here and there is a great IAG Podcast interview with her that you can find through this post.

Magazine generated lists of influential people and companies are always debatable and are generally put together by the editorial staff in about ten minutes over bagels in the coffee room. It is always good when you see that a bit of time has been put into a list resulting in an inclusion like Hanni. You can read the rest of the list here.
Posted by Tim Hughes at 12:33 1 comment: 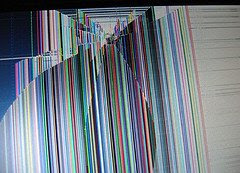 Winner gets a well thumbed copy of the Economist, Forbes magazine, Fortune, Time, Asia Golf Daily, Watch Maker monthly, Knitting weekly and every other magazine I could find to get me through a 14 hour flight.

In Qantas' defence the VOD system was back up and running within about half an hour though the guy next to me had to change seats to find one that worked.

thanks to transguyjay from flickr for photo
Posted by Tim Hughes at 00:37 7 comments:

Email ThisBlogThis!Share to TwitterShare to FacebookShare to Pinterest
Labels: me and my blog, qantas

The BOOT on the road - heading for Chicago back June 23 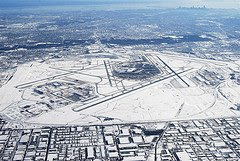 Am spending this week in Chicago for work. Will probably mean I will light on the blog until I return on the 23rd. Hopefully O'Hare will be kinder to me that this photograph.

thanks to photoLab507 from flickr for the photo
Posted by Tim Hughes at 17:41 No comments:

News out today that Pegasus has a new CEO with the promotion of Michael Kistner (previously COO). He takes over from John Davis. The press release links the transition to the launch of the RezView NextGen reservation system. I had a chance to speak to Mike on Feb 18 this year about the impending launch of the Next Gen System.

During the interview he was very passionate about the product. Stressed the time and effort it took to integrate the acquired GuestClick (who provided the basis for the new technology), mapping the new technology to each of the interfaces supported by Pegs to commencing the sale cycle to technology wary and tired hoteliers. I did not get the feeling that he was betting the company on this product but almost.

The piece that all of us are looking forward to the most (Pegasus, hotelier sand distribution companies) is the rate refreshing improvements that will hopefully eliminate the need for a cache or at least dramatically increased accuracy in the cache. Kistner told me that the company is determined through this to protect itself and the reservations systems of the hotels/chains from the dramatically increasing numbers of searches coming out of the meta-search companies. Look to books as high as 500,000 to 1. Staggering numbers.

The part that is the biggest challenge is that Kistner committed in our interview to have RezView NexGen fully rolled out within a year and a half. This means closing down the old product toward the end of the year. Big tech roll out job, big sales job and big expectations from the industry. The Pegasus Board is backing him to do it.
Posted by Tim Hughes at 21:19 No comments:

PhoCusWright and Viator Meetup in Sydney 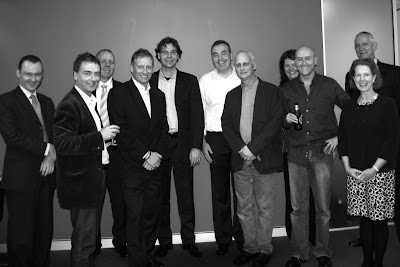 Rod Cuthbert of Viator was kind enough to invite me to a drinks event with PhoCusWright CEO Phillip Wolf. Wolf was in Australia to attend the Tourism Futures conference on the Gold Coast. I talked all the attendees into joining in for a group photo. Rod had managed to put together a very influential group of attendees for this event - and I wanted to capture the moment. Not least of all because the photo includes local senior execs for each of Travelocity (Zuji), Expedia and Orbitz in the same room as well as me playing nice with people from Qantas.

Phillip gave an brief but interesting speech. Two things he said particularly stuck with me.

Firstly he put an new spin on how to think about the battle between the big OTAs and meta-search/content companies. Rather than defining sites such as Kayak and TripAdvisor by their business model and functionality (meta-search and user generated content) he described them with reference to their control over content. He calls them "zero percent sites". That is sites where zero (or near zero) percent of the site content is controlled or produced by the owner. I like that as a descriptor because it goes to the heart of the difference with online retail sites. In telling the story of the battle between the zero percent sites and the OTAs he mentioned a stat I had heard before by is worth repeating. Currently Kayak is generating more air fare searches than Travelocity. Not to say that Kayak is selling more air that Travelocity but more people are clicking the search button on Kayak and generating a search result. Why is that so amazing? Well says Wolf, "Kayak has 58 employees, Travelocity 5,000". Four of the top ten online travel sites by traffic are zero percent sites.

He then took this analysis a little further through taking us through PhoCusWright's current Perfect Storm thesis (The Perfect Storm: Search Shop Buy). It is one thing for us as an industry to have better means for classifying the models and categorisation for each competitor but do our customers care. We as an industry think about supplier sites, OTAs, Hotel Only, Meta/Zero, Affiliates, white-label, last minute, etc etc. But the consumers don't do any of this. All they think about is buying travel. On the whole the distinctions between the models and methodologies are meaningless to the consumer. Wolf encapsulated this through this comment "In our study of consumer behaviour a statistically significant number of consumers actually believe that they buy their travel from Google".

This resonated with me. No matter how much we want consumers to see the market segmented like with think it is and no matter how much with want to believe that brand and model distinctions are being understood by consumers, in the end the average customer types in what they want into Google and are not at all certain who they are booking on in the end. Frightening stuff.

The BOOT is in the Australian Financial Review

Your BOOT correspondent has been quoted in the article "Net closes on travel agents" by Paul Smith and Ben Woodhead in today's Australian Financial Review. But the site is subscription only so you'll have to take my word for it (or go out and buy a copy - old school).


UPDATE - thanks to Grah in the comments who found a free link to the article here. There was a second column in the paper called "Web advisories fear winter of bad content" that has a few quotes from me also. I think there is a free link here but it does not work all the time.
Posted by Tim Hughes at 17:38 6 comments:

David Sifry is well known in the blogging world. His regular updates on the State of the Blogosphere/Stage of the Live Web were seen as definitive statements on the rise and rise of blogging. As founder and (now former) CEO of Technorati he built the blogging engine and the means for bloggers to tell who was linking to whom. Unfortunately about a year ago Sifry left day to day involvement in Technorati and Google's blog search has become the new standard for searching blogs. I have switched to using Google blog search as the results have far less spam than Technorati.

Sifry has now entered the world of online travel through an announcement yesterday (here on TechnCrunch and here on his own blog) of the launch of Offbeat Guides. Online guide books that can be bought (that's right paid for not free) in printed versions ($25) or downloaded PDF ($10). There is a video on TechCrunch where Sifry explains further.

This on demand purchasing of guide books is not new. Lonely Planet have been doing Pick & Mix a while now - allowing consumers to build a book from various chapters and down load it. Tom Hall of Lonely Planet told me recently that they have as many as 100 guides available by chapter and up to February more than 150,000 downloads.

Sifry has launched more business that I ever will but I am not convinced that this will succeed. In the new media world of TripAdvisor, blogging networks like Travelpod (owned by TripAdvisor and therefore Expedia), social networks like WAYN and now the review meta-search of UpTake consumers can find all the free information they need (maybe even too much information). In the old world, companies like Lonely Planet and Insight Guides continue to dominate the shelves of book stores and airport news agencies. There is is already enough/too much free and paid information out there for consumers to allow room for a new company to build a business asking people to pay for travel content.
Posted by Tim Hughes at 13:10 6 comments: