eyefortravel are quoting Ryanair CEO Michael O'Leary as saying that he will cancel all bookings made on Ryanair flights through meta-search. As he puts it

This news comes a week or so after the coverage of a looming issue between AirAsiaX (long haul offshoot of Asian low cost carrier AirAsia) and Webjet (Australian based OTA that uses an aggregation engine to combine non-GDS available fares) over Webjet's reported intentions to screen scrape for access to AirAsia X fares.

I understand the argument of the carriers here that meta-search or aggregated search based engines end up pounding the websites (or rez systems) of the carrier, especially where the connection is based on a robot/screen scrape rather than a direct connect. But on the other hand when an airline opens itself to the internet and search engines and enjoys all the benefits of being indexed and discoverable by consumers, they cant then complain when people build mechanisms for more effective forms of search.

In the case of Ryanair, I am sure they are down on their knees and grateful to the SEO leprechauns that they are the number one for organic search result for "cheap flights london dublin" (see shot below) 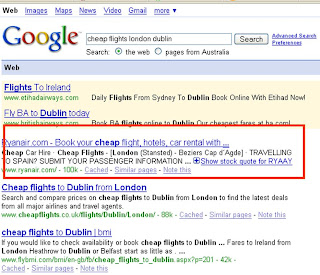 To then turn around and complain about other search players wanting to build indexes as well is a bit like trying to have your un-fetted search cake and control it at the same time. This is especially true if you are a low cost airline. If as an airline you believe that your prices are the best and are the definition of your product then you should embrace aggregated/meta-search as it will prove your case every time. Seems like O'Leary now likes Expedia but hates Kayak.

BTW - what is Etihad doing bidding on Google.com.au for the keywords "cheap flights london dublin". I know the UAE airlines seem to have unlimited marketing budgets and an insatiable desire for growth but surely the clicks from this are a complete waste of money. Whoever their SEM agency is needs to be roused from the marketing conference bar room and put back to work.

Update - if you want to hear a different view check out Timothy O'Neil-Dunne's post on the same subject "Ryanair clams down on Screen Scrapers - Agents too?"
Posted by Tim Hughes at 14:11

Hello. This post is likeable, and your blog is very interesting, congratulations :-). I will add in my blogroll =)THANX FOR MAKING SUCH A COOL BLOG

As an aside, Ryanair's SEO agency should also be taking an early bath. It's one thing having your links appear in position 1, its another to have crap copy, and therefore screw up your chance of ever getting a click.

Cheapflights copy in the ad below:
Search and compare prices on cheap flights to Dublin from London to find the latest deals from all major airlines and travel agents.

I guess that Ryanair's SEo agency (if they have one) is a cheap as Ryanair's fare's!

Madness on the part or Ryannair - it's only going to annoy consumers if they cancel tickets.

And according to the Etihad site you can fly from Sydney to London or Dublin with Etihad so maybe it's not such a waste of money.

Hi,
I am Trade Port India I have visited your blog and I found it quite interesting. But I am here to search cheap accomodation for me in a place like Jodhpur as I will be visiting this particular place in India in the next month. Please can any one help me out? I will be glad to receive the response.

Hmm, this whole thing sounds like a storm in a glass of water to me. Kayak, and every single other meta search engine I've ever come across, do *not* actually do bookings themselves. They link you through to the Ryanair website and the booking then takes place there. There might be some smaller, dodgy ones that Ryanair stops by doing this (and rightfully so), but I doubt they mind the free traffic and bookings.

Or am I missing something?

Sometime people are too greedy.