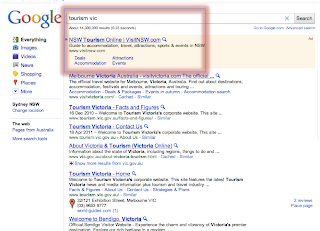 I am an only child so sibling rivalry is a bit of a mystery to me. That said I remember some very vigorous games of football and role playing games against cousins. Nothing beat the satisfaction of crash tackling a cousin during a family event. I imagine that is part of the motivation for this screenshot from a Google search page. On it you can see Tourism NSW bidding for the search term "tourism vic". I would love to be in the room when the head of marketing from Tourism Vic calls their cousin in NSW and demands a please explain....
Posted by Tim Hughes at 14:53 No comments:

WebInTravel tomorrow (Tuesday 21) at the Shangri-La in Sydney. I will be talking on stage with Ian Cummings of Getflight about start up and trends in online travel in Australia and Asia. We have four themes to cover - search, retail and marketing, planning and engagement. 20 start ups to talk through and a lot of analysis to share. Come join us.

Upate - Tweets will be on hastag #witoz not #webintravel
Posted by Tim Hughes at 11:59 2 comments:

Industry blog super-site Tnooz has run a profile of my new travel deal site Getaway Lounge - check out the post here. We have hit 20k subscribers and climbing
Posted by Tim Hughes at 06:00 No comments: 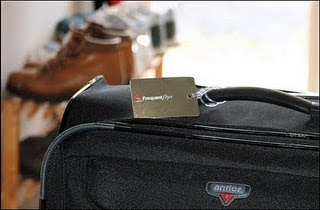 PS - A news site of note asked me to write this extended version of my Russian model vs Qantas Frequent Flyer programme post then decided to pass on it. What do you think - is this extended post any good?
Posted by Tim Hughes at 06:00 3 comments:

WebInTravel Australia: Call for startups to be part of the BOOT and more June 21 in Sydney

WebInTravel is coming to Sydney on Tuesday June 21 at the Shangri-La hotel. WIT Australia is a day long conference on travel distribution, travel marketing and travel technology.
I will be presenting with Ian Cummings of Getflight on trends and start up activity in online travel. I am working on a list of Australian and Asian start-ups to feature in the session. Already on the list are rome2rio, travellr, hotelscombined, adioso, viator, whl travel, Brokepacker, Globetrooper, Travellerspoint, CleanCruising, vroomvroomvroom (because one vroom is never enough) and of course Getaway Lounge and Getflight. Write me if you want to be on the list.
Here is the full blurb from the programme

Bookings still available here. Let me know if you're attending.
PS - we debated a lot the definition of a start-up. In my mind it is any company where the founders are still involved and no exit event has occurred. As a result companies that have been around for a while can still be considered start-ups whereas younger companies that have been sold are out.
Posted by Tim Hughes at 20:10 No comments: