I am on the road next week in Hong Kong. Flying Virgin Altantic. Am on a very useful ticket with the day flight sector in premium economy and night return in Upper Class. New seat review coming soon. Let me know if there are any readers in Hong Kong interested in meeting up.
Posted by Tim Hughes at 15:03 No comments:

I will be speaking and tweeting today (Thursday) from the Australia Pacific Aviation Outlook Summit 2010 at the Four Seasons hotel in Sydney (Travel Technology & Distribution day). I am on stage at 235 pm on The role of airlines and distributors in the “inspiration funnel” and will be back at 440pm on a panel for Leveraging social media to create customer interaction and brand awareness

If you want tweet coverage of the conference then track the hashtag #APAOS. I also recommend following @winglets747 and @sam_lindner for their coverage
Posted by Tim Hughes at 07:02 No comments: 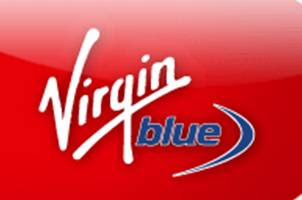 Savage's background (linkedin profile here) was with easyjet and Monarch. She took some time in her speech to share three key differences between the Low Cost/New World Carrier market in Europe and Australia. They are:
Great to get a new view on the Australian market. Any other major differences between the Euro and Australian air markets?
Posted by Tim Hughes at 19:38 3 comments:

I will be speaking this week at the Australia Pacific Aviation Outlook Summit 2010 at the Four Seasons hotel in Sydney. The conference runs July 27-30. Day three of the conference (July 29) is the "Travel Technology & Distribution day".

Also speaking on the Tech and Distribution day are:
I am in two sessions

The role of airlines and distributors in the “inspiration funnel”

* What are the four phases of online travel?
* How consumers get from an idea to going away and making a booking
* The role of airlines, tourism authorities and OTAs in the inspiration funnel

Hat tip in advance to Martin Collings of the Shearwater blog who first introduced me to the role of airlines in the bow tie/inspiration funnel.
Posted by Tim Hughes at 06:50 No comments:

With hotel rooms from $999,999 thank goodness breakfast is included

Screenshot of web version of Booking.com newsletter. Says "Don’t miss out – Top destination vacations from 999999". Thank goodness you get breakfast included at that price. 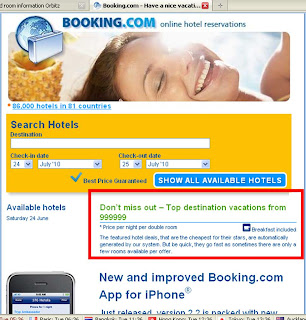 Post live a Tnooz titled "Keep an eye on Asia for next wave of major online travel consolidation". In it I discuss how the three powerhouses of Asia - Rakuten, Wotif and Ctrip - have spent the last three years acquiring companies in Asia, Europe and America as they try to develop growth outside their respective home markets of Japan, Australia and China. I end with a prediction that

"there is more [M&A activity] to come; that we should expect to see more deals by these companies in the next three years. I would also not be surprised to see one of these companies make a major play through a big ticket acquisition in either Europe or America."

Full post here
Posted by Tim Hughes at 11:00 No comments:

TripAdvisor - what did they buy and when

Here at BOOT central we are trying to keep track of the acquisitions and subsidiaries of Expedia’s Tripadvisor. In earlier posts on this we tracked simply by way of a list of acquisitions in reverse date order. With what looks like two deals a year to monitor I have decided to expand the list with some more details. Here is an extensive list of all of the acquisitions made by Tripadvisor since joining the Expedia family.


Have I missed any? Official Expedia Inc listing is here. Yes – Expedia owns Tripadvisor (you wont believe how much traffic I get for the question “who owns Tripadvisor”).
Posted by Tim Hughes at 09:42 2 comments: 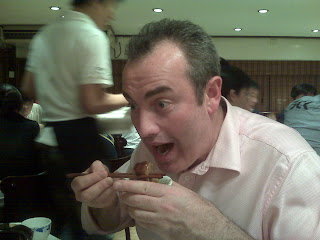 Have just returned from a 13 day business trip covering greater China (China itself, Hong Kong and Taiwan). For the latest in my series of business traveller tips I present to you “seven tips for business travelling in China”:
Do you have any other tips for making the most out of of a biz trip to China?
Posted by Tim Hughes at 23:53 3 comments:

Google and ITA: deal confirmed, BOOT was right, read what the pundits think 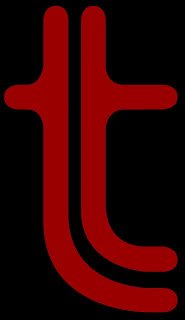 While I was minding my business on a work trip in Taiwan, teams of Google lawyers were dotting i's, crossing t's, cutting cheques and making rich people of out of the founders of flight search software company ITA. Overnight Tnooz carried the story that the deal was done for $700mm. This makes it Google's fourth largest acquisition (behind Admob, Youtube and DoubleClick). At risks of self indulgence, the BOOT first broke the rumour that Google was planning a push into travel meta-search.

With the deal done it is time for the pundits to pontificate analyse. Kevin May at Tnooz central has quickly collected the thoughts and analysis of five (and counting) Tnooz nodes/pundits including me. You can catch all of our thoughts and feelings on this deal over here.

Here is what I had to say at Tnooz

More analysis and commentary over at Tnooz.

[reminder my views are mine alone and not the views of Orbitz or HotelClub]
Posted by Tim Hughes at 19:44 No comments: