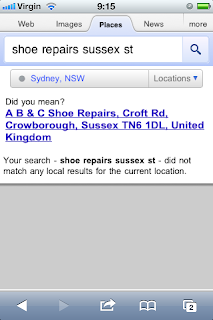 A quick follow up Google search indicates that this particular shoe store is about 17,000km from my current location. Clearly the word Sussex confused the search algorithm. But how? How did the world "sussex" override that Google new exactly where I was via the GPS and new the broad region through by selection of Sydney. Either way, I was forced to put down the phone and try to find some double sided tape to save the day. I am still a mobile fan and believer but am reminded that there is much to doo before the shoe and the BOOT are fully satisfied by the phone.
Posted by Tim Hughes at 15:44 8 comments:

I will be at TRAVELtech 2011 presenting in my role as CEO of travel deal site Getaway Lounge. The session is titled

Daily Deal Websites – A New Distribution Channel or A Flash In The Pan?

Wow, two years ago this sector hardly existed now it is white hot. Travel was slow to get on board – leaving the playing field to restaurants, spas and hairdressers - but not it is full steam ahead with several purpose built companies emerging and big incumbents getting also getting involved. Overview from industry analyst followed by panel discussion.

I am on the panel with a who's of deal site execs in Australia
Registrations are still available here.

Let me know if you will be there and want to meetup.
Posted by Tim Hughes at 20:21 5 comments: