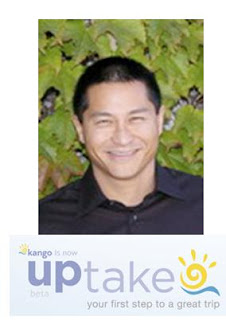 Am on an interview roll here at BOOT HQ. To keep things going I thought it was time to catch up with Uptake CEO Yen Lee. Initially launched as Kango in 2007 with backing from Shasta Ventures Uptake is building a review meta-search business. They have a series of algorithms and search methodologies for collecting and analysing huge numbers of reviews for hotels and destinations (currently US only). They hit the news again in September last year having secured another round from Shasta just moments before the GFC entered our acronym dictionaries.

A year after the new round and four months after Kayak announced the expansion of Travelpost into review meta-search I wanted to find out from Yen how the company was going and what he thought about the market. Here is some of our exchange

BOOT: How is the business tracking?

Yen - four big milestones from the last twelve months:
BOOT: With 5,000 sites in the index and a significant traffic base is the focus now onto revenue, is the product ready?

Yen - want to increase the number of sites searched by 100-200 times. Beyond dramatically expanding the size of the index also want the display to be better customised based on consumer preferences.

Any other expansion plans? What about using ad networks to sell CPM campaigns for revenue raising

Yen - we are happy for now with the CPA model from click referral. Not under pressure to turn to ad networks and CPM. Areexploring expansion possibilities outside of English language but in no rush. Also to expand the product into destinations. Believes long term there is more money in destination activities than hotels. There is a third expansion plan but Yen would not share what is was.

BOOT: Has Kayak's Travelpost revamp left you worried? How about TripAdvisor?

Yen - would be flattering to think we are on radar of either of these companies [as a competitor]. Is convinced there is space for Uptake to take on both of them.

BOOT: Any worries about the fall in online advertising spend?

Yen - not really as not very close to it. Focused on CPA and lead generation revenue. While banner/brand spend is soft, performance based advertising continues to be very strong. Expects growth in CPA to be stronger than PPC as traffic is even more qualified than paid search.

BOOT: Now that you are through your early stages as a start-up what things have you learnt about launching a company and growing a business?

1. There were some early staff members better suited to building prototypes and early products than for scaling the business. Learnt that it was OK to move people around and shed some people and move on;

2. Cash is king -"don't worry about dilution" and "if you have a choice don't spend a dollar"; and

My Take on Uptake

I am not sure what it is about my most recent round of interviews with travel search and discovery sites. Like the others before him in this series Yen is sounding very confident and very relaxed. No furrowed brows and tough talk filled with reality checks and challenging growth plans. He has a comfort brought on from money in the bank and limited revenue pressure (or "lots of runway" as they say in the best Valley coffee houses). My guess is Uptake is actually more concerned about the Kayak move into review meta-search than they are letting on but Yen does have a product that is not only a year a ahead of Travelpost in functionality but most importantly a year ahead in terms of Google indexing. The meta-search model in reviews is not yet proven but the revenue model behind sending qualified leads to hotel companies and intermediaries is proven.

What do you think - is review meta-search a viable business? Can Uptake fight off product launches and marketing pushes from Kayak and TripAdvisor?
Posted by Tim Hughes at 21:00

Can't help but make me smile when I read comments like "Believes long term there is more money in destination activities than hotels."

I couldn't agree with you more!

As someone who works in their blogger network, I'm not surprised to hear Yen's focus on the product end or consumer experience.

I think, ultimately, it will be this focus on product that keeps them at the front of the pack.

I agree with the other comments. Yen and UpTake are moving in the right direction and they're taking the time to do each step right. Refreshing approach.

A very good interview, I think that this space continues to be a very interesting one as lots of new sites push the envelope of what is possible in travel planning and research. UpTake appears to be one of the sites that has a good chance of being a "winner"

Thanks all for the comments. Am looking forward to the battle between Uptake's product and Kayak's reach

Great Interview Tim, I'm interested to see where Uptakes third pillar is set and see how it shakes out.

I have to agree with Yen and Stephen on comments about destination activites.

@Carl - thanks for the comment. Was fun talking with Yen

I am looking for their expansion outside of English language and also expansion with destinations activities products.

Europe could be a good way for UpTake. No need to change language at the begining....

@Tim, you miss to talk with Yen about the UpTake blogger network, they make a incredible job with this bloggers.