Kayak CEO Steve Hafner Interview: keep it simple, focus on search, stay out of Asia..oh...and get back into offline marketing 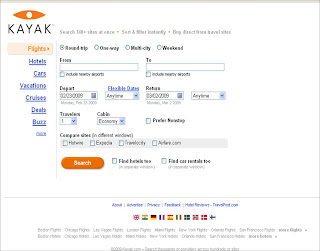 Enjoyed a chance to catch up with Kayak CEO Steve Hafner last week. I had planned the call to be about the challenges of a traffic arbitrage business model. I had hoped to draw out of Hafner that there was pressure in the Kayak model fuelled by rising paid search costs, being late to the review game with the Travelpost revamp and tremendous marketing and product pressure from the drop/elimination of booking fees by the big online travel agents (OTAs). Instead Hafner was relaxed, confident and ready to push ahead with millions of dollars in offline (yes offline) advertising planned.

We touched on two main areas. His focus and plans for the next twelve months (including plans for Travelpost and why the OTA fee cuts don't phase him) and his thoughts on expansion outside America (not in Asia and measured in Europe). On the former there is a lot to be worked on for Travelpost to catch TripAdvisor but there are plenty of flaws with the TripAdvisor product and an accompanying disquiet amongst users. On the latter, the potential risk I can see is that they may be under estimating the challenges of growing in Europe where they have more competitors and less compliant suppliers.

Here is our exchange in detail.

On plans for the next twelve months

Hafner says that Kayak is exclusively focused on three things:
On Expansion plans

An interview with Hafner is famously free from PR generated answer obfuscation. I asked a detailed question about the Asian market that started with a lead in on the challenges in the market, the earlier successes of Qunar in China and Wego in Singapore and Australia. Even made a reference to Sprice and Cheapflights. "So Steve," I concluded, "do you have your eyes on Asia too?". Two word answer - "absolutely not". In short he thinks the market is too small (in terms of search volume) and not mature enough (in terms of online advertising).

Europe is another matter. He admits that the change in MD "reflects a disconnect in aggressiveness" which I read to mean that the outgoing MD had a more aggressive plan than Hafner did (see the Travolution post on this for more details). This does not mean they are pulling out of Europe and he rejected any suggestion that Kayak had made a "false start" there. Instead they will keep on with the general three strategies above run by the two people in the London office. He conceded that there are product gaps in Europe (no Rayanair and some other low cost carriers) as well as higher costs from online marketing as Google is so much stronger but he is there for the long term even with no plans to replace the Managing Director role.

The competitors are coming fast at Kayak with big marketing budgets and constant model changes. Kayak's response is keep doing what we are doing only better and now on TV. What do you think. Good plan?

It's funny to see how frequently we read recent interviews where people is telling simplicity should be one of the main objectives today. Does that mean in the last 10 years we over-complicated things ?

Firstly, I think very little % of consumers in Europe have heard about meta search engines yet. So there is a problem of awareness for sure.

Secondly, it looks like Kayak is fairly well known in the US now. So why keep advertising offline on TV in the US where no major offline advertising was made in Europe. With a $100M budget, surely it leaves you some money to spend aggresively in Europe no?

Tim, I guess HotelClub and Orbitz use Kayak as a distribution channel. What's your take on the leads you get from them compared to other players like TripAdvisor, HotelComparison, HotelCombined, TravelSupermarket and others...

Interesting to see that they view the OTAs as competitors.

I thought that travel meta-search sites generally took the stance that they are working with OTAs to provide more qualified leads :p (with their clients/OTAs paying them for each click)

@Guillaume - I agree. I think we did during the boom times make the online products very complicated for consumers.

I would think there is plenty of scope for using some of the $100m for marketing in Europe but the strong sense I got from Steve is that this would not be spent in an aggressive fashion in Europe. That said, he was very confident that they can continue to grow there.

As to your final question I have decide to keep the blog free of any comments by me on the performance of Orbtiz Worldwide businesses. Hope you understand.

@Jonathan - I think that is their public position but behind the scenes the meta-search companies are making a lot of money sending consumers to supplier.com, bypassing the OTAs.

Tim when are we going to hear your views on Meta Search?

Kayak inspired us over 4 years ago when they were one of the first to make use of google's map api, an enhanced version is still present at their "buzz" section.

They were also the benchmark when we set about building a fast, ajaxy cruise search at Clean Cruising last year. At the time we weren't prepared to put it live until it loaded significantly faster than Kayak's and 12 months later Firebug confirms this is still the case. We try to preload a lot of the heavy javascript components which seems to make a difference.

We're disappointed to hear they're not going to launch into Australia. We think we've got more cruises covered with current pricing and availability than any other local site and looked forward to feeding cruise content in.

Cash is king and offline's got a lot cheaper than a year ago...

@John - I have given some comments in various posts around the theme of the "challenge of traffic arbitrage". Whereas I find that OTAs are in the game of customer acqusition. Using online marketing to capture customers in the hope of using loyalty techniques to the retain them. Instead meta-search needs to buy customers from Google or affiliates at one price and then sell them to suppliers and advertisers at another. Arbitrage works (by definition) if the spread is large enough. I was getting the impression that the spread was narrowing but Hafner denies it.

Thanks Tim for your thoughts.

I agree with your thinking.

I can only add that I would have thought OTA's would be prepared to spend less on a Meta Search customer than a direct customers making the arbitrage game more difficult for meta search to play in the long run.

My own experience in other industries has shown that comparison websites can make it very difficult for merchants if they get a strangle hold on customer behavior. It could be argued that this results in lower service quality or misrepresentation to game the comparison engine system.

Its a fair fight anyways and I am sure that the competent merchants will survive.