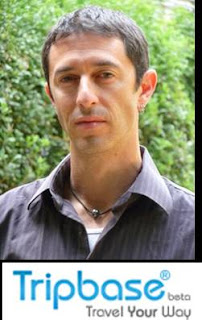 This is Part 2 in my notes from an interview with Tripbase CEO Reuven Levitt. Part 1 was a review of the product and a discussion of the business of travel inspiration and discovery.

In this part I will share with you some of the interesting insights and comments from Levitt on this experiences in raising funding in the Valley. The trigger for the interview series was Tripbase securing $2 million in series A funding.

Tripbase is not the first time the Levitt has raised money for start-ups. In his last venture he raised $12 million through the "usual" VC routes. I asked him what advice he would have for other start-ups looking for cash. Here are his top three tips:
Any other tips out there from other entrepreneurs? While writing up these notes I was also reminded of a post from Jeremy Liew of Valley VC group Lightspeed Ventures on Five things start ups must spend their money on.
Posted by Tim Hughes at 20:24

I am the CEO of TripCart, a Road Trip Planner website. Part of the current crop, with TripBase and others. I have commented in the past (TripSay).

I too raised money from private investors. But it is pretty hard in the travel planning space. Two main reasons -

1. No substantial exits in the past 5 years and

2. Travel is very much not a Bay-area centric field. Kayak in Boston, Expedia in Seattle, Sabre in Dallas, etc.

@TripCart/Elliott - thanks for your comment. What recommendations would you give to others?

I work at another travel startup, (Openplaces) and I wanted to weigh in on the location issue.

We are NOT in the valley and one benefit is lower employee turnover. There aren't 100 cool startups on our doorstep trying to lure our top people away. There's only maybe a dozen startups in town but we have 4 universities which means we probably have to train our new recruits more but there's no shortable of sharp minds.

Once you can present the company as a solid and scaleable revenue generator you should be able to raise money from someone smart enough to appreciate a low risk, break-even investment without "proving" that you have a $1B exit around the corner.

That's in a nutshell. I will be glad to expand on this in an interview. Right now I am using my site to find some cool places to visit around Los Angeles, California.

@TripCart CEO - thanks for tips