Leaving your passport at home stories over at Travel Rants 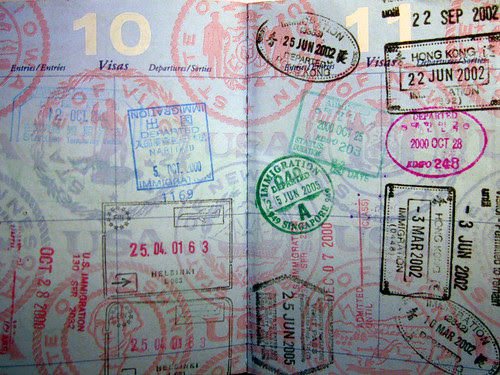 Darren Cronian over at Travel Rants has run a post asking for stories on times people have gone to the airport without a passport. Some very funny stories over there. Here is my "left behind" story

I moved to the UK (from Oz) in 1999. The very first time I went to a day trip meeting to the Continent (Brussels) I raced to Heathrow without my passport like a dumb rookie Australian traveller - not thinking that a flight for 1.5 hours would require a passport. I realised as soon as I joined the check-in queue at Virgin-Express. First response - panic. Second response - turn and run for the Heathrow express. I lived near Paddington station so as I was running for the Heathrow Express I quickly did the numbers in my head - 5 mins to run to the train, 15 mins on the train to Paddington, 15 mins return cab ride from Paddington to house and back again, 15 mins to get back to Heathrow and 20 mins for waiting for trains and taxis. Therefore I needed one and quarter to one and a half hours to get back to the airport. But my flight is due to leave in 30 mins. So I call Virgin-Express to see if the flight is running late.

Me to Virgin Express - Is this flight on time?

Virgin Express to me - Yes sir, right on time.

Me to Virgin Express - I know you are supposed to say that but I actually need the flight to be delayed as I am running late. So tell me, is the flight on time?

Virgin Express to me - OK sir, the flight is running about 20 mins late.

Me to Virgin Express - Are you sure. I need the flight to be about an hour late for me to make it.

Virgin Express to me - OK sir, I am tracking the flight at about an hour and a half late.

Me to Virgin Express - great. Thanks. I'll make it.

And I did... Who knew that departure times were so negotiable. True story.

Photo from hjl on flickr
Posted by Tim Hughes at 09:19

Seriously? How can they do that? I mean, good for you...but for the rest of the passengers?

@Gwen - I agree with you. I believe that lying to you customers is never a good strategy. But if I put on my airline hat, their thinking is

1. Get the customers at the gate and keep them there. If they go anywhere else then we will lose one of two of them and be further delayed should we have to remove their luggage

2. You never know if things might improve and we find a way to get out of here faster.

I hear those arguments but there are ways to manage them without lying to customers.