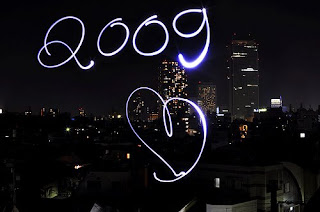 The BOOT is back for 2009. Tanned (a little burnt), rested (though could do with another big sleep in) and ready for action (kind of). Inspired by the Travolution article "Predictions for 2009" I am going to open up the 2009 edition of the BOOT with my predictions for the travel industry. Here are my five predictions for 2009:

Stay tuned to see what I get wrong and right here. The BOOT is back for 2009.

thanks to Tokyo Boy on flickr for the photo
Posted by Tim Hughes at 20:30

I am with you about this not being the BIG year for mobile, but I hope that 2009 will finally see a mainstream mobile application that will focus the platform.

I'm guessing the last sentence on mobile needs to be "will have to wait until 2010"? :)

I'll also add to my predictions for travolution that there will be an increased focus on how "less can be more" in travel. Ie. a lot more focus on niches. I know if I was starting something new that'd be the way I'd go.

i will raise you another 2 airlines in the USA and at least 3 in Europe. They will not be saved but left to ruin.


Domestic travel will depend on US$ and Euro exchange rate. If it remains bad then people will stay home and drive market will grow.


Mobile will evolve but not as you think.... your looking at travel as a booking function :)

Expedia and Wotif will get bigger and the smaller players like rate and hotelclub will have to evolve to survive.

Welcome Back The Boot,

I wonder if travel companies in 2009 will stop focusing how to use social media as 'marketing / advertising' channel and more of an 'engagement' mechanism across both B2C and B2B?

1. Airlines going bust - yes, but as a sidebar, expect Australian domestic fuel surcharges to be re-instated by mid-year. Small amounts to start with. The oil price rollercoaster has just plummeted down the incline, there's a few more curves to come. An important note here is to research the airlines who stuffed up their fuel-hedging - there are some big names in there.

2. Domestic growth yes, during the troughs. Traditional school holidays and weekend travel will remain stable with reduced yields for airlines as fuel surcharges propped up the base airfares. Expect Macq Bank to come cap in hand to Tiger and Air Asia to start Sydney services, they'll be desperate for the fees.

3. Consolidation - yes. I believe Zuji will disappear in Australia in its own right and will be run from offshore. Expedia to a degree as well, but they've spent way too much on SEO etc to pull the plug straight away. Egencia rollout in Australia will be pared back.

4. Mobile Schmobile. Yawn. It takes 200 clicks during a Jetstar sale to get past the the front door on a decent connection. Mobile's good for secondary steps like info, weather and boarding passes. Flight changes - OK, new bookings? - hmmmm, pass.

5. Dinosaurs - plod, plod, plod. The hare (online) and the tortoise (high street) Consumers will look for value and security. Enter the Captain FC. As long as they don't slash marketing (like most kneejerk TCs are doing) they'll come out ahead.

btw - yes good start to the year with this stuff. healthy debate is the essense of innovation, i reckon.

As for “Consolidation is not yet finished”
\---
I agree - however I’d say acquisition will be based more on uniqueness of models and innovation as opposed to volume of traffic (i.e. moving the needle not so important as future potential).

I predict that site’s that overly rely on Google traffic will be sitting ducks to those who innovate within their category over the next 12 months!!
\---
As for “mobile for the travel industry”.

Yeah it has not taken hold, mostly i think because the leading brands have not adapted their products.

For example the webjet and wotif matrix don’t lend themselves well to mobile. Nor does the matrix of my business for that matter. But it seems there is an an unmet demand, that will require someone to fill it, if the established brands don’t.

For example we are considering changing our results matrix (for mobile devices) to only present the lowest prices for five car classes, thereby reduce the size of the results page by at least 10x.

So i reckon there is an opportunity for a flight or hotel site to specialise in mobile, provided they can get the content (or a “GFC shy large brand” such as wotif or webjet to bite the bullet and make a dedicated/reduced results display to suit mobile).

Finally – as for “The dinosaurs will screw up”..

Well we talked to flightcentre 3 years ago about providing them with an online car hire solution.
They concluded they would get the “all in one wiz bank flight, hotel and car system” up soon.

Three years on, the global OTA system is yet to materialise and probably even less likely now given the GFC. As for their car hire offering (e-travel white label) – well i don’t want to be negative, except to say they seem to support the arguement that specialist do it better

I disagree with your prediction regarding mobile travel apps. Please see my Blog entry: http://traveltechnology.blogspot.com/

The collapse in sterling has apparently generated a 23% rise in advance bookings fr flights to teh UK from the US!! There were also an estimated 10 million European tourists shoppping in London at Christams taking advantage of low prices, and there is the beginning foa real estate boom in some areas of the UK as Euro buyers are suddenly seeing UK prices 40% lower than a year ago, and thus a really good investment.

@Anon - agree we could easily see 5 carriers go. On mobile I also agree that the place for mobile is destination/location based services, concierge like advisory services and trip organisation (like worldmate and tripchill). I believe to make it these will need distribution support from the big booking companies. Happy to be proven wrong but feel that this support will not appear in 2009 as the the booking companies will be focused on other things

@worldnomads - I think the focus will be there (on social media) but no one knows how to take advantage. Banner ads on facebook dont work. Deal feeds in twitter have limited effects. Apps in facebook have a short life span etc. A

@AlphaVicator - thanks for take. Interesting prediction that Zuji will shut in Australia.

@Steve Sherlock - great story - we've all be there. Meeting up with a senior exec of an offline dinosaur with a pitch on how to bring the into the online light. Only to be told that they are moments from launch of an in-house solution. Then the CEO sees the quote for the tech investment, the exec you pitched to moves on and the status quo of sinking into the tar pit continues.

@Norman - thanks for link and comment. I recommend all have a look at Norm's post here I agree that smart phone usage is skyrocketing, especially among biz travellers. My concern (as per above) is distribution and take up. Smart phone users have to "discover" the apps and I think this comes from distribution and referral from the place the traveller booked their trip.

I would like 2009 to illuminate the gap between the business need to be niche and tightly focused and the fact that the consumer still seems to be engaged in organic search using VERY generalist terms.

People have been happy to bag the failure of mobiles to deliver but I think the consumer is ready for a mobile travel product but the industry has not got the product offer correct or the purchasing path, there is big money for whoever gets it right first.

With regard to the dinosaurs.
They will purchase small/med online operators to stay in touch.

Business's like True Local will give local agencies and small principals a big leg up in 2009 as consumers seek the comfort and security of doing face to face business in unpredictable times.

Ed Whiting made an insightful comment somewhere the other day when he said "2009 will see allot more lookers than bookers". (as price will be a bigger issue)

@Peter - agree with Ed's lookers v bookers comment. I added my 6th prediction yesterday where I think that the last minute business and pricing for hotels will come back in 2009 as hotels chase the price conscious lookers

Anonymous said...
This comment has been removed by a blog administrator.
8 January 2009 at 4:57 pm

Does anybody have a view on unemployment in travel ?

Anonymous said...
This comment has been removed by a blog administrator.
13 February 2009 at 9:18 am