Have you seen how bad things are in car rental? Avis, Hertz, Dollar all down 80%+ 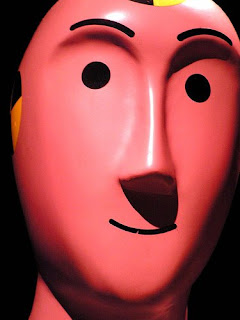 The crash test dummy in this photo maybe smiling but the car rental industry has smashed into the recession/global financial crisis wall with such force that dramatic industry changes are inevitable. I usually spend my time ranting about airlines, hotels and online agents such that I often forget to watch other sectors like cruise and car.

I received an enormous shock yesterday when I was surfing around Yahoo! finance and decided to see how the Avis/Budget stock price was doing. I have soft spot for the Avis Budget Group Inc (CAR) stock ticker (to the extent you can ever have feelings for a stock ticker) for two reasons. Firstly because CAR is such as great ticker for a car rental company. Mainly though because it is the successor to the once public and once amalgamated Cendant Corporation. Back in Sept 2006 CAR took over from CD and Cendant was no more.

Anyway what I found was that Avis stock is now trading at less than $1, has a market cap of less than $85million and is on notice to be delisted from the New York Stock Exchange unless it can find a way to trade above a $1 per share. This is a company that has some 28,000 employees (after a cut of 2,200 in Dec last year) and at the time of the spin off in Sept 2006 had a stock value of nearly $20. The stock reached highs of $30 in mid 07. That said back in 2006 analysts were already saying that the company was in trouble. I have not been tracking enough to speak definitively but clearly the crash to a US recession straight after all of the pain and suffering of high gas prices and credit being squeezed has just been too much for this company.

It may not give the Avis execs much comfort but their competitors in car rental are also in terrible trouble. Dollar Thrifty Automotive Group (DTG) stocks are trading at less than $1.50 off a 52 week high of $27 and a two year high of $50 - only just staving off breaches of debt covenants. Unimaginable drops. Hertz (HTZ) - the market boss - seem to be holding steady at $6 off a 52 week high of $15.32. Standard & Poor's are expecting at least one of these players to disappear into bankruptcy - with Dollar Thirty their lead tip. The other big player is Enterprise - but they are private so I can't find word on how they are coping. [tips welcome]

The other side of the industry is the intermediaries and car dedicated meta-search players. The biggest global online car rental broker is the Lastminute.com/Travelocity owned HolidayAutos. Travelocity has been a private company for a year and a half now so it has been very difficult to get any news on how parts of their business is performing. There was word last Sept on the turnover at Lastminute being in the region of Euro 2 billion per year but September was an age away in this crisis and there was not split out in the announcement for HolidayAutos. [tips welcome]. My thumb in the air guess is that intermediaries should be able to take advantage of this industry pain and secure fantastic rates and deals. Down here in Australia you would think that this could be good news for two of main car intermediaries, the meta-search provider Oodles.com and consolidator Vroomvroomvroom. More info on Oodles is here including a bio on long time BOOT commentator and Oodles MD Steve Sherlock. Smart Company have a profile on Vroom inc Founder/CEO Peter Thorton here.

If you thought the air and hotel industry was in trouble, then spare a moment of industry reflection and concern for our brothers and sisters in the car industry.

Thanks to anthena1970 for the photo over at flickr
Posted by Tim Hughes at 10:59

I think their hasn’t been enough differentiation amongst the major car rental brands over the years, which sort of leaves them all in similar boat in such tough times.

Here is a link on Thrifty/Dollars finances. Apparently they have $210mil cash to try ride the downturn out.

Avis/Budget share price was as low as 56cents, but jumped 19cents on the news of renewed bank financing in Dec.

there is certainly some belt tightening in Australia with staff numbers.

The down turn will likely galvanise online focus with online distribution (via API’s / XML) being a real growth area for them (generally), at least doubling in volume over the last year and being practically the most cost effective channel.

Late last year I spoke to an executive of car rental broker DriveAway (not live rates), and asked him what he thought the future of distribution held. His said my model was (of live rates comparison).

Btw: im actually the founder of vroomvroomvroom. I started it in 2001 with a business partner, and sold the last bit to Peter Thornton in late 2005, at a pretty cheap price without any non-competes clauses. I was in touch with smartcompany for them to change their article. (for the 2nd time)

@deleted - thanks for your spam. Once again I am thrilled to be a target of your random marketing efforts

There are many reasons to be surprised at the poor performance of car rental companies on Wall Street, particularly when you compare the car rental industry to hotels or the airlines, there are many differences, but one is striking in the current environment: by comparison, car rental companies are far more flexible than other areas of the travel industry in their ability to react to downturns in business. Therefore it is so surprising that precisely these companies have lost so much of their value over the past twelve months and are thought to be at risk of failing.

When customers stay away, hotels can’t reduce their inventory (short of closing floors or entire hotels), and they can’t convert luxury hotels to budget lodges. Their only tool to stay in the game is to reduce (and compete on) price, change distribution channels and models, etc., with all of the consequences and repercussions this can have for longer-term revenues and customer perception.

Airlines can reduce inventory by reducing capacity (essentially mothballing planes or stepping out of leases). Alternatively they can reduce price, but then there is not too much room there, as fixed and variable costs are high (and many / most have not exactly been profitable for a long time).

Car rental companies, on the other hand have some distinct advantages, as they can tweak inventory and costs on multiple fronts:

They can reduce fleet by selling cars earlier, or buying fewer cars going forward;
They can change their fleet mix to cheaper cars (which are not necessarily the smallest);
They usually benefit from car manufacturers’ problems by getting better deals on vehicles (in order to keep manufacturers’ volumes going in bad times).

Sure, in the short-term used car prices may suffer, and costs can be high while adjustments are made.
Corporate customers will come looking for lower prices. But this is also an opportunity to re-evaluate relationships and to work together with large customers to reduce the cost of doing business.

This is why I would be surprised if large car rental firms will go under, although I would not exclude some further consolidation in the market.

@Michael - do you think the credit crunch will have a dramatic effect on the car companies ability to change their fleets? Either because regular consumers cant get loans to buy ex rental cars in fleet reduction efforts or the car companies themselves cant raise money to shift to different fleet mixes?

Tim,
RAC companies buy and sell cars as a matter of routine. If they have to sell off cars sooner or in a depressed market, they may make a loss for a while.
On the other hand in many markets they do not actually sell cars on the used car market but rather turn them back to the manufacturers at agreed prices - sort of leasing, if you wish.
In order to buy cars they may have to get credit, depending on their cash situation, and that obviously could prove difficult.

@Michael - thanks for the reply and update

@deleted 1 & 2 - once again thank you for your spam. I never get sick and tired of deleting spam comments. Thank you for wasting yours and my time

The car rental companies would be well advised to develop or participate in affiliate programs. This is an area they have long ignored.

Interesting article. Wish I had seen it earlier!

I'm a car rental aggregator (VroomVroomVroom) and have actually noticed an increase in car rental bookings during the economy downtown.
My feeling on this has been that people have become more price conscious and therefore feel the need to shop around more.

So my point is...
I have seen the "bargain hunter" market increased during the down turn.

@Richard - great to have to in the conversation. In the hotel world we have seen the "non refundable rate" be the tool of choice by the hoteliers for discounting during the downturn. What have you seen with car companies?