Hubwear: so everyone knows which route you took 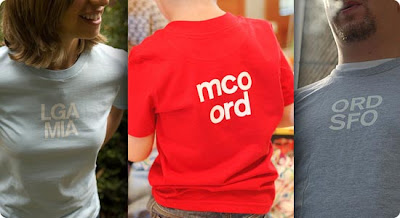 Thanks to Peter Topping at Webjet for sending through a link to Hubwear's roundtrip t-shirts. As you see this is the ultimate in travel geek chic with t-shirts showing city pairs. Peter and I tried to come up with the best combination of city pairs for a Hubwear t-shirt. Peter took the early lead with a suggestion of combining the unlikely pairing of Ezeiza Int'l Airport in Buenos Aries and Ladysmith Airport in South Africa (ie EZE LAY). Can you do better? Winner will be sent a Hubwear t-shirt with the winning design care of the BOOT.

Update - last chance to enter. Will declare a winner on Wednesday 30th. If you are reading this post in an RSS feed you have to check out the comments

Update 2 - this little contest got a mention in the LA Times blog section here.

WINNERS
3rd Prize - simply because it would look so silly on a t-shirt the third prize goes to Nice to Tsaratanana, Madagascar - NCE TTS

2nd Prize - for the unfortunate imagery and helping be get a link out of the LA Times goes to LA to Ati Airport in Chad - LAX ATV (just topped Anglesey, UK to Shepparton, AU HLY SHT for this prize)

1st Prize - I felt compelled to give the award to a combo that might actually get worn in pubic (unfortunately excluding a number of hilarious combinations below and Peter's original entry above). So the prize goes to Finley Aus - Barnstable US or FLY HYA. It captures the perfect combination of city pairs, a love of flying and maybe a hint of naughtiness. If "Karen" gets in touch via timsboot [at] gmail [dot] com, then I will organise for a t-shirt to be sent over.

Thanks to all for fantastic entries.

UPDATE - here is the winning shirt 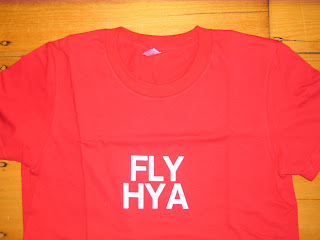 UPDATE - over at the travellerspoint forums that are continuing the thread with more examples such as Barksdale AFB, US to Sembach, Germany - BAD SEX

Email ThisBlogThis!Share to TwitterShare to FacebookShare to Pinterest
Labels: quirky

How about Paramaribo Zorg en Hoop Airport to Changi International...

or LAX to Ati Airport in Chad...

I wish there was a QAN airport, but in the meantime Tim you might like to order QNS SUX :)

Three from an industry insider via email

KUL YUL - Ideal for next christmas;

and his favourite. As he said in his email "to make sure the seat next to you stays empty"... MAD DOG (Madrid and Dongola, Sudan in case you wondered)

We used to do this all the time at the airlines...start with Fresno and you can do anything:

Fresno really should have been a hub city. Just for comic relief!

and at the risk of brown nosing:

The above one, COO is for Cotonou in Benin. You could though combine Cotonou and Coolangatta (Gold Coast) to create COO OOL

With a nod to the Mile High Club was tempted to use Cumana, Venezuela but in the interests of keeping the blog family friendly:

If this has to go on a T-shirt, I'd suggest NCE TTS.

(I live in NCE. Isn't that nice?)
Cheers
Daniele