I was caught in this fog yesterday (see photo). Trip home from London took 10 extra hours 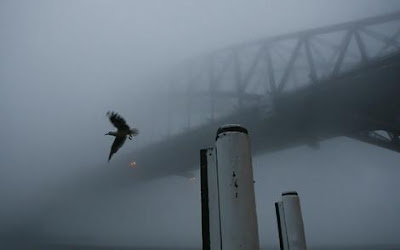 Everyone loves the weather of Australia. Except when the Sydney Morning Fog comes in. For the second time in BOOT history I found myself almost home only to have the plane shoot right over and land in Melbourne. Four hours on the tarmac, four in the lounge and one and half more in the air and I was finally back in Sydney. Home at 4.15pm not 7am. So, who do I hate right now? Do I blame Zeus (Greek God of weather, thunderbolts, etc)? No, I blame the Sydney Airports Corporation for a crappy substandard Instrument Landing System (the dohicky that lets aeroplanes land on instruments only). I have landed a European airports with fog so thick that I have only known that we have been near the ground with the thump of the wheels hitting the tarmac. Time for an upgrade Sydney.

photo from the Sydney Morning Herald article.
Posted by Tim Hughes at 04:34

Email ThisBlogThis!Share to TwitterShare to FacebookShare to Pinterest
Labels: Airlines, me and my blog

You should show the airport this video :)

WOW JUDGING BY PHOTO DID YOU COME HOME BY SUBMARINE ?

Do you like playing in the game which you need to use requiem gold, when you do not have requiem lant, you must borrow requiem money from friends, or you buy cheap requiem lant. If you get requiem online gold, you can continue this game.