If you are planning a Moose Hunt - get cracking. Frontier is increasing Antler transport costs 33% 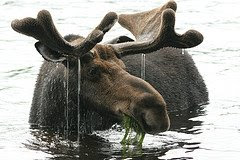 Quick Friday fun. You thought $15 for the first checked bag on American was bad. Frontier has announced that from Jun 10 the cost of transporting antlers will increase by a whopping 33% from $75 to $100. So if you are planning a hunt get going. Thankfully it is still cheaper to breed than to hunt. The price of unaccompanied minors in only increasing 25% (from $40-$50). Alternatively it is poppy harvesting season right now in Afghanistan. Which wont cost you anything - in fact could be quite lucrative if a little risky. Contact Ariana Afghan Airline for travel arrangements.

hat tip to the ever-lovin' Consumerist

thanks to rrogersphotos for the photo from flickr
Posted by Tim Hughes at 09:23

Ariana Afghan Airlines would like to deny any involvement in the unlawful trafficking of narcotics or proscribed substances and entirely dismisses any suggestion that such substances are permitted as carriage items on any of our flights, whether scheduled passenger services, freight or charter.

We do however continue to offer competitive fares for travel and unlike other airlines quoted in this story have not increased our baggage fees for antlers.

Hi, Sorry to contact you in this way but I couldn't find an email address.

I notice that you write about travel and wondered if you would be interested in receiving free news releases on the subject?

If you think this might be of interest to you then please email me... christine@webitpr.com.