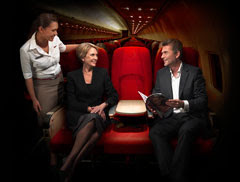 Already Virgin-Blue has stopped calling themselves a low cost carrier, preferring the term New World Carrier. Now we see the last nail in the coffin of their status as an LCC - the launch of premium economy on domestic routes. You can now add this to other hallmarks of a traditional carrier - business lounges, a frequent flier program (Velocity), fully flexible fares, online check-in and more.

Not announced but surely coming soon are tiers of frequent fliers, a wine club and leather embossed passport holders. Why would DJ do this you ask? Well profits for the six months to Dec 07 are down 10% on the previous year and the stock is down 37% (SMH article). DJ has reached saturation almost it efforts to capture low spending domestic travellers. The growth area they need to hit is the corporates - who do not want to face hours of domestic travel (ie Sydney to Perth) in cramped seats.

The other big product question for them is where Virgin Blue will target the front of the plane product for "V Australia". This the airline to be launched for Pacific route (AU to West Coast US). Will they do a premium economy style seat for a full near flat business class to try and take on Qantas. My guess - given that they have only asked for 10 flights per week - is that they will chicken out and leave the near flat to QF (see my earlier rant on the Open Skies agreement).

Here are the specs on the new product.

UPDATE - 22 Feb DJ CEO Brett Godfrey is quoted (in Travel Daily) as saying that Virgin Blues fastest growing segment is corporate travel and that he can see premium economy becoming a flagship product. Further confirmation that with 31% domestic market share DJ cannot see any more growth in the market from an aggressive Ryanair style low cost approach. I presume this makes Tiger Air a little happier (now thirteen destinations in Australia).
Posted by Tim Hughes at 20:25

is it just me or does anybody else see a global ailine in the making.

What if he gets US up and running?

In effect he has then joined the dots