Expedia continues a trend of Pay Per Kick Marketing 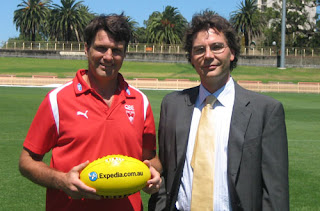 Expedia AU is now the "official online agent" for the Sydney Swans (who - for my international readers- play a type of football only played in Australia). Part of the deal is Expedia branding on the football at home games introducing almost a world online travel first of pay per kick. Is not the first time Expedia AU boss Arthur Hoffmann (seen here with Sydney coach Paul Roos) has been active with an offline branding campaign (you will recall the lovely ladies in lemon). It is also not Expedia's first foray into kick based sports

sponsorship. For a period around 2002 (and maybe longer) Expedia was a mat sponsor of the brutal sport of Ultimate Fighting Championship. As you can see from the image, left that was pay per kick, smack, wack, hack, twack and break your back marketing at its finest.
football photo courtesy of expedia.com.au UFC photo courtesy of UFC

UPDATE- See also the video on Kevin's Travolution blog that has a [lost for words] video of dancing Expedia suitcases for more on Expedia's global branding drive.

UPDATE 2 - Expedia AU have now appointed a local PR firm - Sefiani Communications Group - to help with Australian marketing and profile building (according to B&T magazine). No word on plans.

Targetted and measurable. Now they just need to get the logo on the tennis balls at the Australian Open. Good work expedia, it's obviously a good time to hit you up for a loan.