Always hurts when the wrong rate is loaded

Expedia has a great deal in Phuket. Totally unbeatable. Beautiful hotel with lovely rooms, views of the water, sparkling swimming pool...the works. Only problem is that the rate is only AUD$16 per room. In other words its the wrong rate at the right place at the wrong time. Looks like this inventory is coming from their GDS feed rather than a direct contract so the problem is almost certainly with the hotel or their GDS connection partner not Expedia.

With help from an anonymous tip I passed this onto friends at Expedia so sure it will be corrected soon. Thankfully a not well known hotel and it is the rainy season in Phuket so should be fixed before any damage done.

The screwy rate problem has hit most of the major online travel sites, often resulting in a protracted battle between the site and supplier over who's fault it was. As you could expect there are message boards devoted to findings mistakes and publishing them. 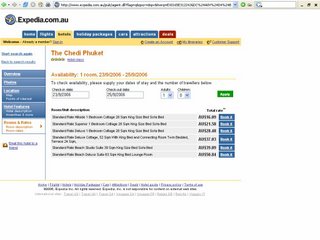 And here is the hotel's own site with a rate 10x more. 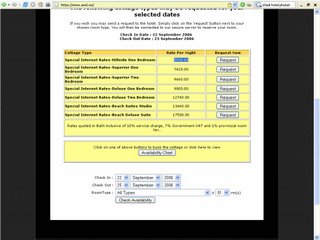 Email ThisBlogThis!Share to TwitterShare to FacebookShare to Pinterest
Labels: expedia

From the anonymous friend at Expedia... Thanks Tim for letting us know... we alerted the hotel and they corrected their rates and were very thankful to say the least... You probably just saved someone their Job Tim... good luck is on your way Tim... Yours Truly... anonymous Cameron from Expedia...

Cam will pass your thanks also to the original tip provider.