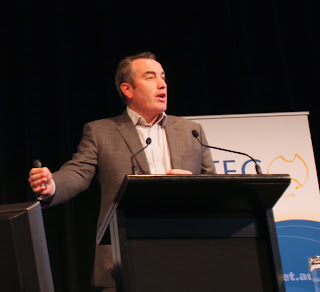 I examined search, looked at the future of recommendations and made up a lot of new words:
Focused on Australia I looked into:
Some handy tools:
From various conference presentations and attendences I:
Speaking of reviews, the BOOT covered another 200,000kms or so and wrote reviews of
Ultimately I ranked Cathay Pacific as my airline of the year after a close pitched battle between the Cathay Pacific and Virgin Atlantic Herringbone seats

On the quirky front:
Three more business traveller tips were published on
Finally - the BOOT received mentions in
If you are still reading, I will keep writing. All the best for 2011 - see you on the road.

Thanks to Dustin Ling for the photo of the BOOT in action at ATEC
Posted by Tim Hughes at 13:13

Email ThisBlogThis!Share to TwitterShare to FacebookShare to Pinterest
Labels: me and my blog, not out series, tnooz

thanks Tim, still reading and enjoying the boot. man of the match performance.

Pity the aussie cricketers couldn't have a score line a bit more like yours!

i agree with you that online travel 2011 is certainly shaping to be another jaffa of a year at the crease. no doubt you'll be on the front foot, bowling beamers in a cameo innings full of hat-tricks.

It will be interesting to see how fairseach go rotating the strike, trying to keep the ita googly out. can’t wait for the third umpires decision.

as well, despite the top spin and the sledging, AA has thrown down a real rib-tickler to gds/ota’s. Its a real sticky wicket this one, hopefully they find the match fixing sweet spot.

ok my tail wagged long enough now. oh BTW i bowled a maiden over last night. and wow, what a wicket maiden. tried a Yorker but got run out ;-)