Thinking about the gap between economy and business fares 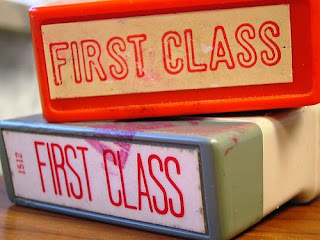 Was sent a question as a follow up to the recent post on the airline industry with fuel at $60 per barrel. Was asked "Wanted to get your thoughts on the possibility of airlines lowering their prices. Most think the airlines will maintain prices despite the falloff in passenger demand".
Here is my reply

I have been trying get my head around the two competing airline trends. Firstly the decline in demand but also the corresponding drop in capacity. The current economic pain is in effect being absorbed by the airlines through reductions in supply. This can only last so long, as there reaches a point where airlines cannot cut any more (ie cheaper to keep planes in the air than on the ground). The other factor that will hit in the next month or two is a dramatic reduction in premium fare usage by consumers. I have looked a very unsophisticated statistical sample (my peers, friends and check-in staff at premium class counters) and have noticed people flying long haul economy for work they had not done so for ten years. This sent me to think about the costs of long haul premium travel now and historically.

I remember that back in 1990 when I first starting looking at travel as more than just a wide eyed kid, the gap from economy to business to first was double:double. Business was twice the cost of Economy and First was twice again. An economy trip to Europe from Australia was $2,000-2,500, business was $4,000 - $5,000 and first was $8,000-10,000. Now, 18 years later you can still get an economy fare to Europe for around $2,500. But the gap to business and first is times four and times one and a half. Business is now four times the cost of economy and first is now one and a half times the cost of business. No doubt that the quality of the 2008 version of premium product is light years beyond that of 1990 (flat bed as standard, limo pick ups, hundreds of hours of interactive entertainment, world class restaurants in airport lounges etc) but the price gap is now significant. Of course, airlines have looked to fill that gap with premium economy (twice the price of standard economy). But the 2008 version of premium economy is not as good as the 1990 version of business (seats smaller, pitch not as deep, staff not as attentive).

The airlines were able to justify/maintain/get away with this increasing the price gap/multiple from 1990 to 2008 due to a booming economy and ever increasing T&E budgets. But now the economy is boomed out and T&E budgets are being wiped out. From this I believe that the first hit on pricing we will see is in premium classes. I expect that very early next year (if not starting right now). Meanwhile capacity cuts will continue. Then some tipping point will hit where capacity cuts have reached as far as they can and early cuts in premium have gone as low as they can. Then economy fares will hit the floor and more airlines will hit the wall.

I say all this back on good old fashioned blogger intuition and anecdotally driven research. I have not done the deep price and capacity analysis that should accompany an answer like this - but that is the blogger prerogative.

UPDATE - LA times travel blogger Jen Leo just let me know that expiring and midnight tonight Qantas are offering two for one in all classes to AU and NZ. Expect this to be the first of many.