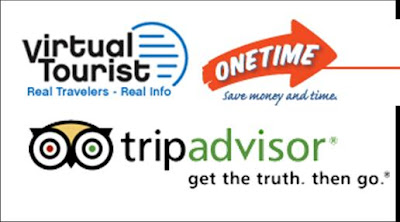 I have been off the grid so am late in commenting on TripAdvisor's acquisition of social network Virtual Tourist and meta-search company OneTime.com (deal press release here). alarm:clock is crediting the nine year old Virtual Tourist with 5 million uniques and 30 million page views a month. Hotelmarketing.com reported in April that Virtual Tourist had passed the million member mark. The release says that VirtualTourist General Manager Giampiero Ambrosi and OneTime General Manager Dena Yahy will stay with the company but no word on what will happen witth Virtual Tourist founders J.R. Johnson and Tilman Reissfelder.

I have been saying for a while now that TripAdvisor is an advertising network. They are already calling themselves the TripAdvisor Media Network (see the bottom of this press release as an example).

The combined network is carrying some 32 million unique users per month. To put this in perspective I understand that ValueClick Media is the second biggest of the independent advertising networks (here is a list of the top ten from Dec 07). By independent I mean one not owned by a large publisher such as Advertising.com (AOL), BlueLithium (Yahoo!) and aQuantive (Microsoft). ValueClick claim 137mm uniques it their ad network. 32 Million for TripAdvisor is still well short of the ValueClick mark but still more that enough to be a top network. I predict that very soon TripAdvisor will start selling ads for sites they do not own.

I have been keeping a running list of the TripAdvisor acquisitions. Here it is
All of which is owned by TripAdvisor's parent Expedia (You would be amazed how much Google traffic I get based on the search "who owns TripAdvisor")

Guillaume over at hotel-blogs has generated a nice graphic to capture them all.

Update - report that Expedia/TripAdvisor paid $85mm for VirtualTourist and OneTime.
Posted by Tim Hughes at 08:20

I'm sure we all would like to know how much? one site guessed a figure at 17m but I'm guess is that it closer to 10m.

While VT may have some impressive users/pv's the conversion on these users I suspect is rather low as compared a destination guides site.

Beyond their users they have little rank in G for commerce keywords that drive conversions.