Poker Break - BOOT gets wiped out by a Royal Flush 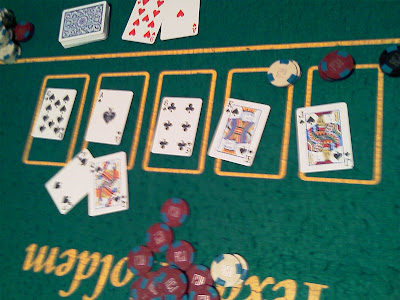 A break from travel to share a poker story. Above is a photo of my first and (hopefully) only loss in no limit hold'em to an honest to God royal flush. My hand is the suited ace nine up against the suited queen four. The community cards came down from left to right (ie flop ten, ace six). I raised pre-flop and was called by the competitor with the queen four. I checked the paired aces that came down, he went all-in and I called. We turned cards to show me in the lead with the pair of aces and him on a flush draw. Not only was I beat by the flush drawn coming off on fourth street king of spades, I was then destroyed and humiliated by the Royal Flush on the river with the jack of spades. The chances of a Royal Flush in Texas Hold'em - 649,740 to 1.
Posted by Tim Hughes at 17:10

Hello Tim! I did not know we both shared that love for No limit hold'em. Ive only seen 1 royal flush in my life and thanks to god I was not involded in the hand.

Just a comment about the hand as you played it. You checked after the flop, he was second to speak and went allin on the flop; you did not specified, how big were your stacks but I won't play my "tournament" or my entire stack on a pair of ace with a 9 kicker when there is a flush draw possible and when it looks like the opponent might have it or might have two pairs on the flop (ace ten or ace ten suited)..

Obviously my reasoning take only the cards into account, and not the previous hands with your opponent. Im talking about cards only, not the player.

Second thought: Entering a hand with Q4 suited is risky when someone raised before you.. either it was a small raise or either that guy was a loose player..

Anyway, it's a real pleasure to see that picture on your blog Tim!

Sylvain - fantastic comment. Thanks To describe my opponent as a loose player would be an understatement. He is a famous loose player in our group. I was convinced he was on a flush draw not two pair or ace with a bigger kicker. Odds of the flush coming off were 36% at best (assuming no one had folded a spaded). Pot size meant calling would more than double my stack - so easy call. But (as you say) only an easy call if you believe on a draw. Should also say that we were not doing tournament play - a rebuy was possible if I lost