Wotif.com has lodged what I am sure is their favourite filing of the year in stating that they have jumped to 82.129% of Travel.com.au through an acquisition of AOT's 19% stake. Travelweekly have some good commentary here from AOT CEO Andrew Burnes. Seems he was very interested in securing his distribution through Travel.com.au - though would appear he has made a nice profit as well.

There is now no reason for the remaining shareholders to keep a hold of their shares. Wotif have crossed the magic 75% barrier and this deal is over. Now all Wotif have to do is to figure out what to do with three brands in one market, HQs in two cities, two supplier teams talking to the same people, two CEOs, two maybe three technology platforms and a partridge in a pear tree.

UPDATE 2 - Wotif.com has declared its offer "unconditional". This means it does not matter if any other acceptances are made or not. Either way Wotif will purchase all the shares that have accepted the offer. To increase the certainty that this will be as many shares as possible, they have also extended the period for acceptance (for a second time) to 31 January 2008. In checking through the filings came across this great piece of advertising placement on smh.com.au 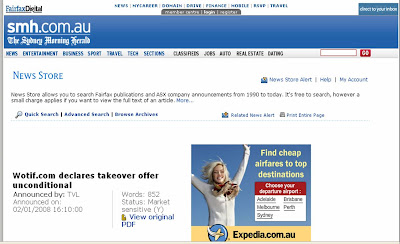 FINAL UPDATE - deal done! Confirmation that Wotif have 97% of the stock and can compulsorily acquire the rest. The offer formally closed today (1Feb08). TravelWeekly
Posted by Tim Hughes at 11:29

Wotif have fought their way to top and have now entered the OTA big league in a major way. They deserve a big welcome and congratulations. They are a local Australian player and have much to offer the Australian travel business. Their power to reshape the online game currently being fought out by the domestic airlines, FCI & Webjet for dominance will be refreshing. With a shortage of talented and experieinced staff in market those who loose from the two HQs two contracting teams formula will do well in the Candidate short Sydney market. We will all benifit as they spread their excperience across the industry.

I think it will be interesting to see how they leverage their existing last minute model with year round product. I wouldn't say that Wotif have entered the OTA big league... Remember, the models are very different and whilst Wotif demand a strong monthly visitor base, Travel.com.au don't.

I wonder if we might see something very strange where they keep Wotif.com at 28 days and pitch the Lastminute.com site as a more full service 365 days out business. In effect Wotif as the last minute brand and Lastminute as the unrestricted stay brand. Its possible...