Which planet is Lonely Planet travelling on?

Poor old Lonely Planet - first they missed the Internet revolution and then they had to throw in the towel and sell out to the BBC. But we always assumed that their strengths would hold true. That their editorial standards and world knowledge would give them a permanent place in the travel industry no matter how powerful the wisdom of the crowds became. Now they seem to have misplaced a global city in this article from the Saturday Sydney Morning Herald - look at the title calling Rio de Janeiro the capital of Argentina. 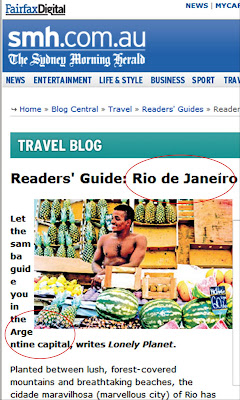 There are of course two punchlines to this story. As those of you who submitted to the torture of watching the sequel to I Know What You Did Last Summer will remember (or used other less convention means for studying geography) even if Lonely Planet had put Rio in the right country it is not a capital.

Of course we can assume that since Lonely Planet has remained in non-US hands that they will at least get it right that Europe is a continent not country and Budapest is the capital of Hungary.
Posted by Tim Hughes at 10:19

as much as it pains me to say so, however, this is probably not the fault of Lonely Planet but the journalists on the SMH who subbed the page!! oh dear.

You're probably right (but more fun to blame LP)