On your marks, Jetset, go (well next year we will)

I have gone from feeling contempt for offline agents that have been slow to move online to almost pity. Clearly Flight Centre has made huge mistakes online (as we discussed here). Now we have a better one. Large Australian franchise network - Jetset Travel - have announced boldly a plan to "step up its online offering with the launch of a fully bookable website next year".

That truly is like one dinosaur up to their nose in tar, with a tsunami, meteor and earthquake all on the way, turning to another and saying "next year I am going to grow an opposable thumb"

Here is the full article thanks to Travelweekly. 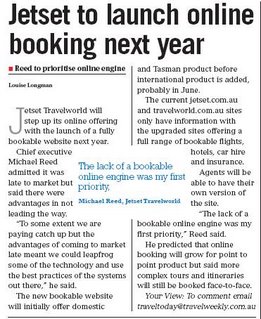 Email ThisBlogThis!Share to TwitterShare to FacebookShare to Pinterest
Labels: dinosaurs

That really is one of the funniest things I've read this month. Welcome to the party Jetset.