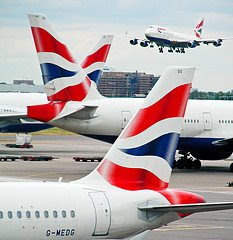 A work conference in opened up the chance to fly with British Airways long haul Business Class (or Club World). It is now a piece of Air industry folk law that one of the main outcomes battle between BA Club World and Virgin Atlantic’s Upper Class for UK customer traffic to the US resulted in BA introducing a fully flat bed into business class, changing the definition of long haul business class forever.

I remember the first time I tried the BA flat bed and it was a revelation. Today some 9 years later and the product is even better. For your BOOT correspondent the seat is the best in the sky. I think Singapore Airlines has an edge in Service, Qantas has an edge in food and Virgin Atlantic has an edge in the BOOT factor (that something extra) but judged stand alone on the seat I prefer BA’s Club World to any other business class seat I have tried. On seat alone BA would win against another seat review so far. The overall rating has been let down by the entertainment system, placement of World Traveller (premium economy) and online check-in experience (probably highlighting a flaw in my scoring system).


The BOOT rating for British Airways International Business Class (Club World) is a 4.5 stars out of 6 or "Good Seat". Here is the detailed review (Details and scoring system for airline seat reviews) (other seat reviews can be found here)

A very nice and comprehensive review, thanks for posting!

Tim, While agreeing with your review, I want to add something extra: having flown more times than I'd care to remember, and in all cabins of the plane, it occurs to me there's very little relationship between which seat or cabin you're in, or indeed the physical environment of the plane in general, and whether you have a "good flight." The two things that really have an impact are your own physical and mental state when you board, and the people around you. Frankly, if it's a choice between a good mood plus interesting seatmates and a lousy mood plus snooty, silent fellow travelers, then I'd take an economy seat on Bezurkistan Airways over first on SQ any day. (Fortunately, I usually fly QF and BA, so it's not an issue...)

@ Tung thanks for the attempted spam link in your comment. Always appreciated.

@Rod - agree (except if it means flying Garuda!)

i will take the flatbed first class seat with 'snooty' passengers any day thanks. im not on the plane to make friends.

the seats aren't bad, but BA has the customer service in the business. If you have any issues or requirements different from the norm, God help you, because BA won't!

I think on printing boarding passes and not being able to check in on connection flight because you had separate tickets, that is not my experience. You just check in for both flights and at the airport, if you have luggage, you show both boarding passes and your luggage will be checked to your final destination...have done that with BA connecting to BA and other airlines like Delta etc and in reverse