What the hell does Recombobulation mean? Maybe the TSA can help?

This sign was spotted at Milwaukee's Mitchell International Airport. It is the place passengers go after the security check to put their belt and shoes on and reassemble computers and toiletry packs. I tried to search around for the definition of Recombolutation. This was a typical response online 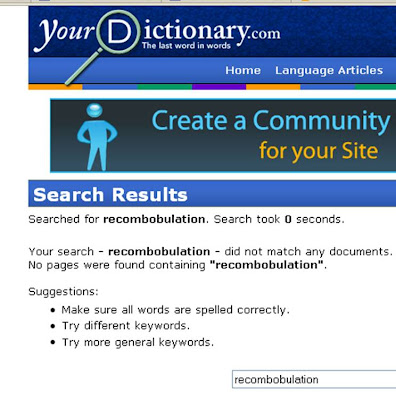 That is - it is a made up word. Trying to figure it out I came across "Combobulate" which is (according to definition-of.com)

To put together in a somewhat mysterious manner. To bring something out of a state of confusion or disarray. To manufacture by some unusual or novel means. Antonym: discombobulate.

"putting back together of personal items in a somewhat mysterious manner"

Not sure if helping people do things in a mysterious manner should be hallmark of TSA service but then I am not the professional in this area. I am just thrilled to be able to add the word recombobulation to my list of techorati tags.

UPDATE - Looks like it was the airport not the TSA that put up the sign. Here is what the photographer "lark is already taken" had this to say about the photo in an exchange with me

"FWIW I had the impression that the airport put up the sign, not the TSA. Perhaps the airport is expressing an opinion on the whole screening process.."

UPDATE 2 - More fame and recognition for Milwaukee. The American Dialect Society has voted "Recombobulation" as the most creative word of 2008. To complete the story - the winner of the "word of the year" was "Bail Out" with runners up including "lipstick on a pig" and "change". Thanks to Steve Sherlock at Oodles who sent me the link.
Posted by Tim Hughes at 17:19

Fascinating find. Recombobulation. That makes me stumble on my syllables. I never knew that area was what it was called. I wonder why they needed to 'make up' such a lengthy 'mysterious' word.

well, I suppose it's shorter than "area where you can reassemble your self-respect after we have treated you like a terrorist or a two-year-old or both"

I imagine there is a modest sense of humour behind the sign;

If you look up "discombobulated" you will find plenty of references. "confused or disconnected"

"Recombobulation" is the transit authority's attempt at its opposite. Strictly speaking the signage should say "Combobulation area"

Ahhh... I've always known we Milwaukee-ans are sophisticated. But here, finally, is the proof for the whole world to witness.

I'd write more, but I have to recombobulate my keyboard which has become mysteriously discombobulated.

MoneyBonanza said...
This comment has been removed by a blog administrator.
4 December 2008 at 12:46 pm

@CommentDeleted - I had to recombobulate your comment due to the spamocity of it. Apologies if something became deconstructulated during the process

After this insightful post, I am now dedicated to focused round of recombobulation after every security check. Although I may raise a few eyebrows when I ask for the nearest area to recombobulate...

As a native of Milwaukee and a regular traveler to the city for both business & pleasure, I was happy to see that the "Recombobulation Sign" at Mitchell has become internationally known.

For those who have never been, Milwaukee is a hidden gem...really. Do your research beforehand, though, because downtown is somewhat dead at night.

That is gold! My american friend often uses "Discombobulation", to indicate she is confused. I imagine she will be extremely discombobulated when I use recombobulation in my next conversation.

This will keep me laughing for days!

The combobulation snowball is gathering pace - from Obama's inauguration....
"Four [thousand] to 5000 people were discombobulated," the Senate sergeant-at-arms, Terrance Gainer, said. "There were another 236,000 who were very happy with the service."
Link here

My favourite quote about recombobulation and airport security so far would have to be.."It's a stressful time," she noted. "You've got to throw out your soda." Nice

Personally, I like to think that recombobulation is the TSA's ironic reference (from a nation renown for their love of irony) to their commander-in-chiefs linguistic acrobatics. Perhaps we've all misunderestimated Bush's impact on the english language.

RECOMBOBULATION is just another American 15 letter acronym for:

R = Reconstruct your belongings
E = Examine your stuff and see what was stolen
C = Combombulate
O = Order replacement parts for squashed laptop
M = Mend the socks next time.
B = Burst that bladder from drinking the whole bottle
O = Obama will change all this
B = Budwiser is the king of Milwaukee (advertising)
U = United States Secret Service is watching you
L = Luxury hotels in Chicago Illinois will give you shampoo
A = Alcohol confiscated?- go to duty free
T = Time to get rid of all that bling
I = Idiot! - you plane leaves in 10 minutes. Run!
O = Only in America!
N = No place for smelly shoes.