In March Expedia and RyanAir agreed to be best friends. They announced a partnership with Expedia to take over from OctopusTravel reseller Needahotel as the land provider on RyanAir.com. At the time of the announcement I recalled a story from 1999 when I was working for Expedia and on a conference panel with RyanAir CEO Michael O'Leary. At the time RyanAir was so convinced that all online travel would be sold consumer direc that he turned to the crowd and said 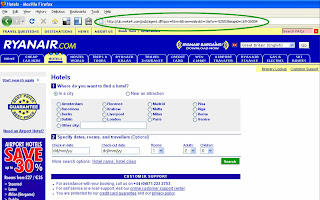 With that kind of background, the deal was never going to work. 19 months later the deal is on its death-bed. RyanAir have announced that they are terminating the deal next month (it is not dead just yet) saying (according to CNN) "Expedia has failed to make payments according to the pair's contract terms". A fight to the death?
Posted by Tim Hughes at 20:18

Thanks for question. The url is on the domain "wwte.com". This is Expedia's whitelable domain also known as World Wide Travel Exchange. My point being that post-termination the URL for Ryan Air hotels will be somewhere else.