You have all by now heard the news from London (BBC, Skynews, SMH) and the now world famous quote "mass murder on an unimaginable scale". The threat of innocuous looking liquids being able to bring down airplanes is truly fightning

I was also amazed by some of the photos circulating of the chaos at airports with:

Flights cancelled across the board (BBC) 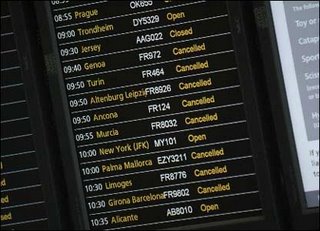 A sea of people at Heathrow (SMH) 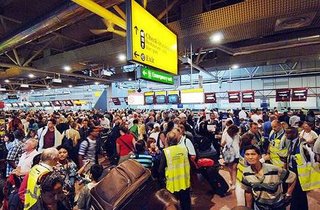 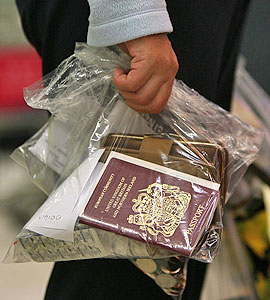 I find this last one the most chilling. The first two are the "standard" horror at the airport photos. I been there in the midst of Heathrow chaos - first the day after the invasion of Kuwait in 1990 and second just a few days after Sept 11 (an earie mix of chaos and emptiness at the same time) so can testify that it is even worse on the ground that he photos show. However, it is the final photograph that is the surprise and the most impactful as I haven't seen it before. I find it unnerving to look into the bag of a regular traveler in highly irregular circumstances and learn that the only things safe to take on a plane are your passport, some pills and your wallet. Tells a lot of the story in one image.

Qantas has listed the items banned on board from its flights out of the UK and they include - all liquids such duty-free alcohol, suntan lotion, creams, toothpastes and hair gels as well as books, laptops and of course the carry-on luggage itself.

Email ThisBlogThis!Share to TwitterShare to FacebookShare to Pinterest
Labels: Airlines, me and my blog