Yesterday I flew Auckland to Sydney on Qantas. Playing on their in-flight video was the new Roman Polanski movie Ghost Writer. This movie contains one of the now ubiquitous airline product placements. This one is a doozy.

It starts with Ewan McGregor enjoying a scotch in an amazing looking lounge with no mention of the brand - though clearly the Heathrow Virgin Atlantic Upper Class Lounge. Then it quickly moves to McGregor sitting very comfortably in a beautiful herringbone seat being served by a lovely looking stewardess while both are bathed in red/purple hue lighting. Again no mention of brands but clearly a Virgin Atlantic Upper Class Seat. Then it is time for the closing shot. The sweeping music filled mid shot of the airline filling the sky and filling our screens with the Virgin Atlantic brand. The VS brand money shot. But that is how it plays out in the cinema not on a Qantas flight. No way. As the grainy blackberry photo below shows the money shot is blurred out, the tail is a generic red smudge rather than a bright and embolden declaration of the Virgin brand . Can't blame QF for the mid-air editing - it is a natural reaction to blur out "unsavoury" images from an in-flight video. 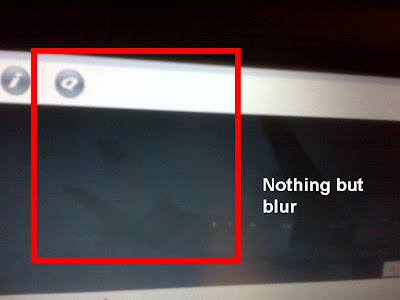 Hehe, if going to those lengths, I would have swapped it out with a Qantas logo straightaway :)

BA did a similar thing to VS a few years back with the Bond flick, Casino Royale.

can't blame them i suppose,Strikes me as a little bit paranoid to go to that trouble though

can't blame them at all - completely understandable (but amusing)