Jump On It raises $1.3 million, joins group coupon war and is targeting $15-20mm in revenue per year 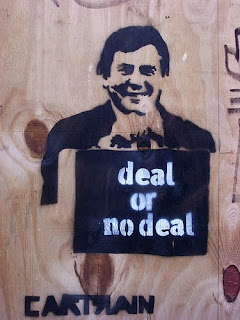 An idea poached from a US mega star star-tup, a business plan and a history of building and selling companies are the pieces that Colin Fabig put together to raise $1.3mm to launch Australian based Groupon clone “Jump On It”.

A press release hit my inbox announcing the raising by Jump On It and caught my interest because I have been thinking a lot recently about the group coupon model boom and how it might impact online travel. Not just because the barely 16 month old Groupon raised money at a valuation of $1.2/1.3b, not just because Jump On In is joining Spreets and Scoopon in the Australian group coupon push and not just because between Groupon, Living Social and BuyWithMe have raised a combined $225mm and counting. Though those are reason enough. The reason is that I am interested is that between the buzz around group coupon systems and zing around the private sale companies like Jetsetter and VoyagePrive I am wondering if there is something new happening in travel and activity distribution. Wondering if we are starting to see another piece in the move toward the deal targeting and recommendation systems we have been talking about here at the BOOT.

On the business model

Jump On It is running a typical group coupon/Groupon model. In case you don’t know the group coupon business model, it involves a retailer/advertiser offering a discounted product or service via a voucher. Consumers sign up to buy the discounted product or service. But there is a minimum sell order/threshold that as to be met before a voucher can be issued. For example a restaurant offers $100 worth of food and drink for $50 so long as 50 people take up the offer. The deal is normally time limited (maybe also the voucher). The marketing company (Groupon/Jump On It/etc) takes the credit card number up front but only charge the card when the participation threshold is met. Usually one deal per city/area is offered per day. Jump On It makes money by charging the retailer a booking fee (built into the voucher price). Fabig admitted that the booking fee may be the whole amount of the voucher meaning that the retailer sometimes makes no money on the voucher – seeing the whole process as a customer acquisition tool.

It is impressive that Fabig and partners Adam Rigby and James Gilbert managed to raise a sizeable angle sum by Australian standards off the back of a business plan and CVs - with no product live. Money came via investment house/deal shop Nextec and from serial Australian investors Roger Allen and TotalTravel founder Malcolm Baker (NB Yahoo bought TotalTravel in 2009)

Fabig is not worried about the competition from US companies that might enter or the AU players that have already started. He is convinced that the successful coupon players will be those that only offer one deal a day per city not a mass of deals. Means that he sees room for 3 or 4 players to be successful. The Americans don’t worry him. He believes they are a while away from caring about the Australian market by which time Jump On It will have established a foothold.

One of the companies vying to be one of "2-3 players" is Spreets.com.au. Spreets CEO Dean McEvoy is looking forward to battle with Jump On It. “Game On!” McEvoy said in our chat. Spreets has closed a round of it's own (amount undisclosed) and is glad to hear that Jump On It is also in the market as it “keeps you sharp and validates the opportunity”.

On marketing and using Facebook to kick off the business

Fabig sees the challenge in growing the business as a marketing and execution one, not a technology one. He says that the technology is not complicated. Success it is about executing well, building the viral audience. They have been very active in using Facebook as a customer recruitment tool, starting well before the launch. In an impressive display of social media marketing they set up a series of city fan pages (ie I [heart] Sydney]) and claim to have attracted 100,000 fans to use as the initial marketing database.

The biggest challenge I see is scale. Targeting 1 deal a day per city and focusing on Australia (and maybe NZ) means a target deal market of 10 maybe 12 deals per day (assume six cities in AU, four in NZ, maybe two regionals in Australia or splitting Melbourne or Sydney into two). Groupon is in a market where 72 million people live in the top 200 largest cities (2004 data). Fabig is not worried about this, believing that even with a market of just 10 cities he can build scale and a business generating $15-20 million in revenue per year.

If the can do it, then no reason can’t. Viral and marketing will be a challenge but nothing that good execution can't fix. The challenge will be scale. Making a one deal a day per city business big enough in a market with so few cities.

thanks to bixentro's for the photo via flickr
Posted by Tim Hughes at 16:26

Hi Tim,
nice post we're watching this and the private club space with interest to see where it provides options for our partners.
Scale is definitely the key for Jump to make its target with only one deal a day per city granted they wouldn't have got the $1.3M if they didn't have an good answer to that.

Another Australian based one launched this week too - www.ourdeal.com.au