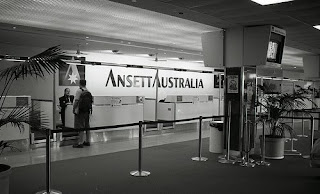 Equities and investor blog 24/7 Wall street posted last week on the "Twelve Major Brands that Will Disappear" - joining the likes of Ansett.

Topping the list was the struggling former Car Rental giant Avis/Budget. As I talked about in this post Avis/Budget (CAR) is a shadow of its former self. Having just avoided de-listing on the NYSE, the company is struggling under a mountain of debt, mounting costs and falling revenues.

At number twelve on the list is United Airlines (UAUA). 24/7 Wallst puts United among American and US Air as the three most at risk airlines in the US and in convinced that someone like Continental will step in as an acquiring for one of these. United is most at risk among the three (according to 24/7) because their passenger numbers are dropping faster (despite your BOOT correspondent's recent travels with United). In my 2009 predictions I mentioned that I thought more airlines would go bust (hardly a revolutionary prediction).

Hat tip to Seeking Alpha where I first spotted the story

Thanks to Adelaide Archivist over at flickr for the photo
Posted by Tim Hughes at 16:53

budget brand is pretty much a commodity, so if it got to a price only proposition then i guess they could be in trouble.

avis is not so commoditised due to their Preferred system.

Example at brisbane airport. When i rent with Avis my name is on the board and i go straight to my car bay and am off. it really is VIP service and not extra cost. i love it.

whereas budget's Fastbreak, does give me a slight discount, but i still have to go to the desk to collect the keys. if there is Q then I’m treated like the average Joe. admittedly they are generous with free upgrades for Fastbreak members.

Point being? - I reckon Avis clients are more likely to stay loyal given the superior product, leaving Budget to compete much more on price .a.k.a. commodity.

@Steve - agreed. One way Budget could make a brand play is to take the lead in inclusive pricing and no surprises. It still amazes me in the car rental how often consumers feel they are ripped off with a "Gotcha Capitalism" moment - those extra airport, drop off, fuel, children, animals, insurance, having too much fun, enjoying yourself charges that you get hit with. Budget is as famous for those fees as anyone else. If they ditched them they would have a new brand promise to live up to.