Business traveller tip - arriving at and leaving from new airports 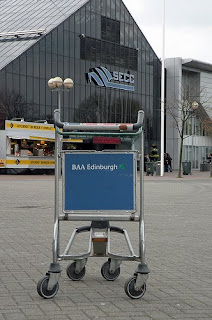 The professional road warrior is a champion of routine. As highlighted in the great montage of Clooney's character's obsessions in Up in the Air, the routines of a business traveller are designed and honed around saving time. Every minute saved on every step of a trip adds up to hours of time at home rather than stuck behind a family of four, in front of a humourless immigration agent or in an intimate embrace with a TSA agent who did not even have the decency to buy you a drink first.

But the routines can get shattered by change. Especially when a new destination is added to the mix. For example I have been doing 200,000 miles a year for the last 10 years yet guaranteed that once a year I go to a place I've never been to before. This year it was Manila. Last year Taipei. Year before Seoul. The road warrior routine is shattered by the ins and outs of arriving and departing from and unknown airport. Hence this next in my series of BOOT business traveller tips - rules for arriving to and departing from a strange (read new) airport.

Departing
Any other tips?

For more business traveller tips check out this post.

Thanks to Myrrien on Flickr for the photo of a cart from Edinburgh airport found some 60 miles away from the airport
Posted by Tim Hughes at 14:35

Thanks for some other magnificent post. Where else may just anyone get that kind of info in such a perfect method of writing? I have a presentation next week, and I'm on the look for such info. –