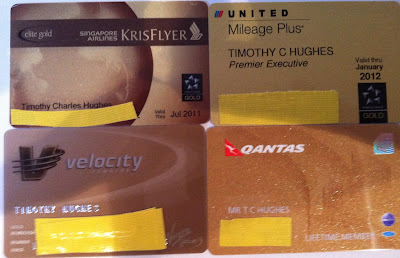 After 10 years as a Qantas top tier Platinum Frequent Flyer, I failed to re-qualify. Yet in a twist of frequent flyer magic, just as I was losing top status on QF, through a series of status matches and promotions I managed to get Gold on both Velocity (Virgin Blue) and United. I have also been a Gold Singapore member for a number of years. Making 2011 the first year I have been Gold on four airlines at once. I am sure it wont last into 2012 as even with my travelling load, keeping four in Gold is impossible. But I thought I'd share with you (minus the numbers), the river of frequent flyer gold now available to the BOOT.

My Qantas status is an interesting one. I cannot begrudge Qantas from downgrading me as I failed to accumulate the requisite status credits. In the end I accumulated 1,060 against a target of 1,200 (about 10% short). I called and asked Qantas to do me a favour and keep me platinum (quoting ten years) but the answer was a very polite no. But there is a twist here for Qantas. After years of flying with them I am lifetime Gold (you can see the "Lifetime Member" message bottom right of my Qantas card). Therefore with Gold a lifetime status and Platinum unlikely to be regained in 2011 (re-qualification rises to 1,400 status credits), my incentive to fly Qantas to accumulate status credits drops to zero. If I can't get to Platinum and there is not need to fly to stay at Gold, then it is better for me to push as much as I can to retain my other cards. It is strange how incentives work. By missing out (just) on re-qualifying for Platinum, Qantas and oneworld will likely see a dramatic drop off in my flying and United/Singapore/Star will see a dramatic increase in my travel (prices being equal of course).

Qantas were very polite and charming in my downgrade. In fact they sent me a very well designed white with grey markings pack with my lifetime Gold announcing "Introducing a new way to fly" (photo below) 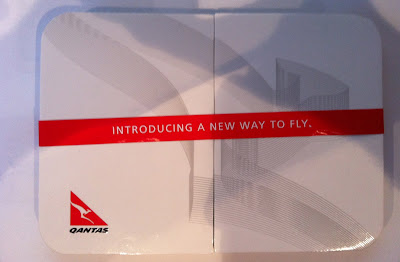 In addition to the new card and the usual "thank you and here you the list of things you get" note from the CEO and head of loyalty, the pack has two RFID chip based luggage tags. The new card also has an RFID chip. Between the two I can check in (for domestic) and drop off my bags without having to go to a kiosk or visit and agent. Assuming it works it means no more boarding cards or luggage tags (domestic only). More photos of the pack and baggage tag below. 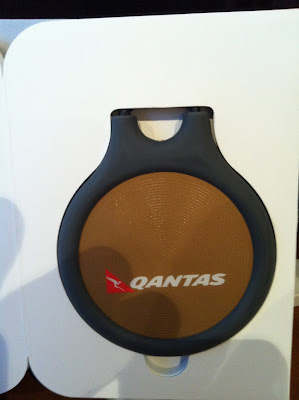 I'm loving the concept behind all of this upcoming RFID technology. I was overjoyed just by the idea of using it for the subway - but now the airport as well?

Life is (or will be) grand.