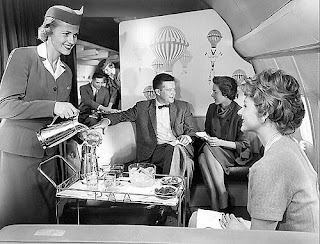 10 years ago last month(January 2000) British Airways changed business class flying forever when they introduced the lie flat business class seat. I am sure that the revenue management team putting together the pricing and yielding plan for that launch did not realise that 10 years later they would be causing the death of first class. The launch itself completely changed the pricing for the standard 3 class airlines. In the early nineties (with the old Business Classes) the general rule for pricing between Economy, Business and First was "double double". Business was twice the cost of Economy. And First twice the cost of Business. But with flat beds stripping out seats, the pricing had to change. The rule went from "double double" to "by four by one point five". Sydney to Europe in economy was a $2,500, Business by 4 at $10,000 and First by 1.5 at $15,000. The gap between the price of Economy and the price of Business grew too great to withstand the Global F'n Crisis.

Today Qantas announced (during the publication of their results) that they would spend $400mm refitting most of the fleet to eliminate first class in all but 12 of its A380s.

On Jan 26 this year Air NZ announced their new plans for class configurations. They announced a revamped business, high end premium economy and the first efforts at beds in economy class. It does not include a first class (Upgrade:Travel Better blog post here on the announcement).

I therefore conclude that First Class is on its deathbed. My prediction is that within the next 3 years (by end 2013) all but the most luxurious of carriers that have flat or near flat Business Class seats (ie everyone bar Emirates, Qatar, Etihad and maybe Singapore) will follow suit and remove First Class from their configurations. That will leave Business as the new First with a huge gap to Premium Economy and smaller gap to Economy. In effect having moved from a 3 class airlines product to a 4 class airline product to a 2.5 class range of product.

But the change will continue. I predict that over the course of the following 7 years (starting in 2013 and ending in 2020) the seats in premium economy will start to lean a little more, then be spaced out a little further, then go a little flatter, then have their own lounges and check ins and finally an airline will announce Krug being served in "Business Class". We will realise that Airlines are back to the "natural order" of front of the plane with flat beds, middle of the plane with large, very comfortable seats and the back filled with grouchy people wondering why they signed up for the "enhanced transportation techniques" afforded by economy class.

In other words we are witnessing the end of First Class....until they rename Business, flatten out Premium and we go round again. Do you agree?

PS - if you like stories and analysis on the life, death and opulence of first class travel check out Shashank Nigam August 2009 post on SimplyFlying called " Singapore Airlines A380 Suites – A Class Beyond First or a First Class Branding Debacle?".

thanks to x-ray delta one via flickr for the photo of a 1959 707 first class on board lounge area
Posted by Tim Hughes at 20:05

I couldn't agree more, you've nailed the pattern totally! Work in the travel industry long enough and "what goes around, comes around" isn't just a saying, it's a fact of life. Of course there are still people out there who want the First Class product and, even before QF's announcement, it's becoming more and more difficult to fulfil that desire.
Heading out of Australia to Asia there are very few options (makes it hard to get full value out of a promotional Round the World or Circle Asia First class fare) and even Singapore Airlines doesn't offer that front end experience from all cities.
I guess in the end it's all semantics: remove First Class, make Business a bit more expensive and put it in the pointy end (and cut back on the number of seats which QF is planning) and suddenly, voilà, it's your new First class and the circle's come around!