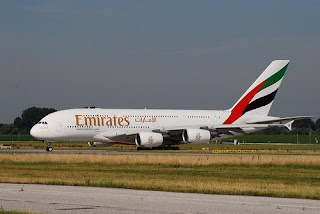 Emirates have announced they are scrapping their in-flight magazine (Open Skies). Brand Republic is reporting that the magazine adds a tonne of weight to each A380 flight. They are touting this as both a green and cost cutting initiative. I refute the green part as this is an airline that has just announced showers in the A380 first class area. That is going to add a wasteful half a tonne of weight to the plane in extra water (according to Airwise news).

This tells me an interesting story about the economics of in-flight advertising. Airlines traditionally make a lot of money from in-flight magazine advertising as they have a great travelling demographic and a near certainty of circulation and readership (especially on long haul). The scraping of this magazine is probably more to do with the changing on-plane media habits of consumers. With Emirates carrying 600 channels of entertainment (that WORK my dear Qantas flying readers) they have provided the audience (passengers) with less reason to read the magazine at the advertisers with a more enhance media to utilise. My guess this is not a fuel or green decision, it is a marketing and advertising sales decision. What do you think?

haveing just alighted from a LAX-SYD flight, i noticed all the magazines ie INC and Newsweek are a thing of the past.

When i asked a girl with a grey uniform she said cost cuttings.

Airlines are wonderful things. They put out advertising for long haul all focused on the customer. Telling you, the punter, that it will be a pleasure to fly. Then they do all that they can to remove the elements that make the flight manageable such as entertainment and magazines. Who's to blame? Oil speculators of course

Like the German word for "gravity" in the photo credit - Erdanziehungskraft, strong!

I haven't flown Emirates but unless their IFE system runs all the way up until someone leaves the plane they should keep the magazines. I find the IFE system on Singapore cuts off like 20 min before landing, and you're still on the plane for another 15-30 minutes on the ground, so that's usually the hour when I've finished all my own reading material and am thumbing through "SilverKris". Perhaps distributing the magazine only in premium cabins would lose most of the weight while enhancing the ad demographics.

I had to urgently go back to USA. Airline tells me my bag is to heavy so i take laptop out and place in travel pouch which is now hand luggage.

Im still taking the same weight on board right ? Only difference is now i need to take Ltop in and out via 4 separate security controls.